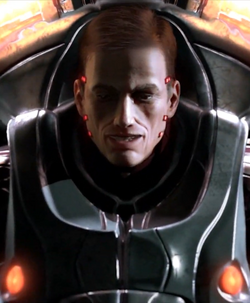 Under unspecified circumstances in Earth-TRN199, Peter Parker became the CEO of Alchemax, operating behind the scenes and allowing his former career as Spider-Man to end with the general populace believing him to be dead. The Anti-aging technology has allowed him to live longer than normally expected. Guilt ridden over the loss of his loved ones from long ago, he was presumably working behind the scenes and capitalized on Walker Sloan's time gate technology and his trip into the past, hoping to channel the quantum energy of the gateway for his own purposes.

With the respective ages of Miguel O'Hara and Peter Parker in flux as the two communicated across time, the Peter of 2099 planned to rewrite the reality in his image and bring all those he cared about back from the dead. Having failed to convince his younger self or Miguel to work with him, he battled Miguel O'Hara using an Iron Spider suit after his younger self returned to the past, but was quickly incapacitated by the combined efforts of Miguel and the loose tentacles of Atrocity stuck in the timestream. Peter is eventually defeated by Miguel and is presumably returned to his original history when reality is restored, the younger Peter reaffirming that he would not allow himself to become the CEO.[1]

Seemingly those of the Peter Parker of Earth-616 along with:

Seemingly those of Peter Parker of Earth-616, but with far more experience, knowledge & increased intelligence.

Like this? Let us know!
Retrieved from "https://marvel.fandom.com/wiki/Peter_Parker_(2099)_(Earth-TRN199)?oldid=6057344"
Community content is available under CC-BY-SA unless otherwise noted.