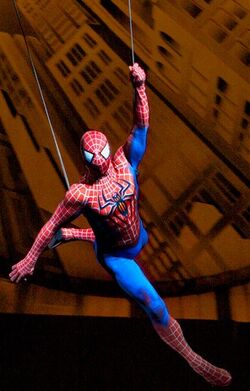 At Midtown Manhattan Magnet High School in Queens, New York, local teenager Peter Parker gives a book report about Arachne, Goddess of the Weavers. As Peter gives his report, Arachne descends to the stage and tells the audience her story. Thousands of years ago, Arachne was a skilled weaver who became conceited and boasted that she was greater than the goddess Athena - who challenged Arachne to a weaving contest. During the contest, Arachne created blasphemous images of the gods. Furious, Athena destroyed Arachne's work. Devastated, Arachne hanged herself, but Athena took pity on Arachne and transformed her into the world's first spider. Now Arachne is cursed to wander the universe and weave her web for all eternity.

After class ends, Flash Thompson and his friends gleefully torment Peter. Peter has a crush on popular girl Mary Jane Watson, but they both have unhappy lives. Mary Jane has an abusive father and suffers at home while Peter suffers the torment of bullies at school. Peter has lived with his Uncle Ben and Aunt May ever since his parents Richard and Mary Parker died in a plane crash when he was a baby. A few days later, Peter and classmates go on a field trip to the genetics laboratory of scientist Norman Osborn and his wife Emily, who explain what they hope to accomplish with their genetic research. While Peter takes pictures of the lab for the school newspaper, the Osborns put the whole lab on lockdown as a dangerous genetically altered spider has escaped. While the students and scientists panic, the spider lowers itself onto Peter's shoulder and bites him.

Peter soon becomes aware that he has spider-like powers as a result of the spider's bite - along with a muscular physique, 20/20 vision and the ability to emit web strings from his wrists. He uses his powers at school to defeat Flash and his buddies in a fistfight. After seeing Flash give Mary Jane a ride, Peter decides to buy a car to impress her. He heads out and enters a wrestling tournament, where he defeats champion Bonesaw McGraw for the grand prize of $1,000. Peter returns home only to learn that Uncle Ben has been shot by a carjacker. Ashamed of his recent selfishness and realizing he's powerless to save his dying uncle, Peter has an emotional encounter with Aunt May - unaware that Arachne is watching over him. Arachne encourages him to use his gift to defend the innocent from evil. Peter vows to avenge Uncle Ben's death by using his powers to save the world and notes that "with great power comes great responsibility".

Peter then makes a costume with the colors that Arachne described to him - red for every heart of the innocent that bleeds and blue for the sorrow of endangered citizens - before swinging through the city on his webs, fighting criminals and saving innocent civilians as "Spider-Man". The Daily Bugle then begins to publish articles about Spider-Man while Peter is hired by editor-in-chief J. Jonah Jameson as a freelance photojournalist. Meanwhile, Norman Osborn begins thinking that Spider-Man stole his research as the military organization Viper Worldwide presses him to accelerate his project. Norman contemplates the dilemma with Emily while Peter shares his first romantic moment with Mary Jane. Norman then decides to experiment on himself, causing an electrical surge that results in Emily's accidental death. Norman goes insane and becomes the "Green Goblin".

The Green Goblin comes up with a plan to genetically alter other humans as he did himself. Through his experiments on his former employees, he manages to create six villains: Carnage, Electro, Kraven the Hunter, the Lizard, Swarm and Swiss Miss. That night, Mary Jane tells Peter that her love for him has grown and he admits that the feeling is mutual. The Goblin and his new alliance of criminals - calling themselves the "Sinister Six" - go on a rampage through New York. Spider-Man quickly defeats the Sinister Six as the citizens of New York cheer him on, unaware that the Goblin has managed to escape. The Goblin arrives at the Daily Bugle and tells Jameson to print his plans of dominating the world through genetic mutation. The Goblin also tells Jameson that he gave Spider-Man life, making Jameson believe Spider-Man is in league with the Goblin and therefore giving Spider-Man an even worse image from the Bugle. Later that night, Arachne comes to Peter in a vision and explains that she is his guardian along with the reminder that being a hero is his destiny and he cannot escape it.

Maligned by the media and suffering financial woes, Peter wants to spend more time with Mary Jane after missing the opening night of her play and begins considering to take time off from fighting crime. Upset over Peter's constant excuses and not wanting to lose the best friend she ever had, Mary Jane suggests they take a break from their relationship. Hurt, Peter decides not to resume his heroic acts as Spider-Man and gives his costume to J. Jonah Jameson telling him that Spider-Man has quit. He later takes Mary Jane to a night club and impulsively proposes to her. While there, the Green Goblin intercepts the club's TV signal and sends a message to Spider-Man threatening his loved ones. Peter takes Mary Jane to his apartment and breaks off their relationship so that his enemies won't target her. After telling Mary Jane that he will always love her, Peter takes a walk and realizes that he needs to be a hero not only for Mary Jane but for the world. Spider-Man then recovers his costume from the Daily Bugle and goes after the Green Goblin.

The Goblin sits at a piano at the top of the Chrysler Building and humorously boasts to the audience of his plan to destroy New York City. Spider-Man arrives ready to fight, but is soon unmasked when the Goblin reveals he knows Spider-Man's true identity. Peter attempts to revive the good-natured Norman within the Goblin, but to no avail. Peter engages the Goblin in combat, but before he can finish him the Goblin reveals that he has Mary Jane, who now dangles from the Chrysler Building. A flying battle over the audience takes place and when it seems all hope is lost, Spider-Man webs the Goblin to his piano. The Goblin, not realizing this, thrusts the piano over the side of the Chrysler Building, taking him down to his death. After Spider-Man saves Mary Jane, she tells him not to leave and reveals that she has guessed who he is. Peter removes his mask and they embrace. The two contemplate their new life together before sirens begin wailing and Spider-Man swings away.

Peter later joined the Spider-Army to oppose the Inheritors on Earth-001.

Seemingly those of Peter Parker of Earth-616.

Like this? Let us know!
Retrieved from "https://marvel.fandom.com/wiki/Peter_Parker_(Earth-11714)?oldid=6514854"
Community content is available under CC-BY-SA unless otherwise noted.