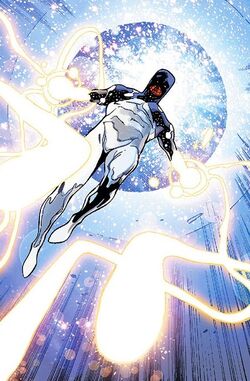 I've kept the powers of a god. The Inheritors would be foolish to face me here. And as long as the rest of you stay in my world, I can keep you safe.

The Spider-Man from this universe retained the powers of the Enigma Force.

Sometime during Spider-UK's search for the source behind the death of the spiders, he found this reality, and it became the refuge for many of the Spider-Men, whom were hunted by the Inheritors. As strong as the Inheritors were, they were still severely outclassed when compared to someone with such power, and therefore did not dare to step foot into this dimension. However, he could only assist them to this extent as he would lose the Enigma Force if he were to leave his universe. This resulted in the resistance of Spider-heroes to be based in the Central Park of Earth-13.[1]

When the Inheritors attacked Earth-13, Peter confronted their leader, Solus. Even though he was powerful, Peter's power derived from pure life force, which was what the Inheritors feasted on; although Solus acknowledged that his power was too great for his children, Solus himself was powerful enough to drain the Enigma Force from Peter, killing him in the process. [2]

Spider Physiology: Spider-Man possesses the proportionate powers of a spider, granted to him from an irradiated Common House Spider (Achaearanea tepidariorum) which bit Peter Parker that was apparently already mutated from prior exposure to certain frequencies of radiation and received a final, lethal dose during Parker's attendance of the exhibition. The radioactive, complex mutagenic enzymes in the spider's blood that were transferred at the time of the bite triggered numerous body-wide mutagenic changes within Parker, granting him superhuman strength, speed, toughened flesh, and numerous arachnid-like abilities. His powers include:

Enigma Force: When Loki created the Tri-Sentinel, Peter gained the powers of the Enigma Force, it enhanced the scale of all of Spider-Man's powers and abilities.[3][4] With those powers, he even managed to take on the likes of Magneto, Dr. Doom and Hulk.

Spider-Man with the power of the Enigma Force has a base strength of 100 tons and was able to send the Hulk flying into the moon in a single hit.

Unlike many superheroes, Spider-Man does not have a weakness he is automatically vulnerable to, but in recent years methods have been created to render him vulnerable.

Like this? Let us know!
Retrieved from "https://marvel.fandom.com/wiki/Peter_Parker_(Earth-13)?oldid=6464250"
Community content is available under CC-BY-SA unless otherwise noted.