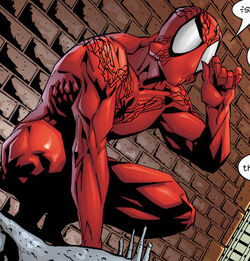 Spider was the red-headed Peter Parker, a mass murderer who merged with the Spider symbiote. As a sociopath who "liked hurting people", Peter had a sense of humor akin to Deadpool.[2] In the course of his criminal career, he was sentenced to 67 consecutive life sentences by a jury.[3]

He was drafted by the Timebreakers into Weapon X.[2]

He replaced Daredevil after it was presumed the Timebroker had sent him back home. When Hyperion (Earth-4023) became a member and de facto leader of Weapon X, Spider joined him in his cause to conquer multiple realities. Peter was subsequently killed by Firestar (Earth-3062) with a mega-blast from her powers,[4] in 2005.[5]

He was buried in the prison cemetery of his home reality.[5]

The Carnage symbiote, like the rest of its species, is vulnerable to heat and sonic based attacks.

Like this? Let us know!
Retrieved from "https://marvel.fandom.com/wiki/Peter_Parker_(Earth-15)?oldid=6466677"
Community content is available under CC-BY-SA unless otherwise noted.