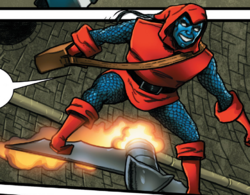 I'm good. But I can be better. Maybe I can't be the man you think I ought to have been but maybe I can be a better man than one I became when he died.

Peter shared a similar history to his Earth-616 counterpart, up until the death of Gwen Stacy.

Overwhelmed with rage, Spider-Man murdered the Green Goblin, and later retired his Spider-Man identity. He soon after became Goblin, and was later targeted by the Inheritors as a Spider-Totem.

A Spider-Woman from another dimension attempted to recruit him into a growing army of Spiders to protect him from the Inheritors, but he initially turned the offer down. When the Spider-Woman revealed herself to be an alternate Gwen Stacy, he sacrificed himself to save her, as he wasn't able to do so in his own dimension.[1]

Like this? Let us know!
Retrieved from "https://marvel.fandom.com/wiki/Peter_Parker_(Earth-21205)?oldid=5239364"
Community content is available under CC-BY-SA unless otherwise noted.