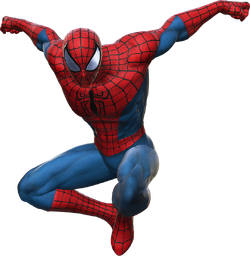 Look out, here comes the Spider-Man!

Spider-Man participated in the battle against Thanos, and the heroes eventually came out victorious.[2] Sometime after Thanos was defeated, his universe was merged with the universe of the Capcom warriors. He fought with and alongside the warriors for a while, before the true threat was revealed: Onslaught. With the assistance of other Marvel heroes and the Capcom warriors, Onslaught was defeated and the two universes were split apart once more. [3]

When the universes became merged again, Spidey again began fighting alongside and against the warriors. Like before, the true attacker was revealed much later as an entity from another universe, known as Abyss. After a very long, and lengthy battle, Abyss was defeated. [4]

Over a decade later, Doctor Doom and a group of other supervillains joined forces with Albert Wesker, a villain from the Capcom universe, in an attempt to obtain the power of Galactus. They merged the two universes together, and with no clear attacker, both universes assumed the other was invading. However, the villains failed to obtain the power, and Galactus selected Dr. Doom, Wesker, and Dormammu as his heralds and attacked the merged universes. Galactus attempted to devour both planets, but was eventually stopped by the combined power of the ever-growing universes. Peter later tried to sell J. Jonah Jameson photos of Spidey defeating Galactus, but was turned away because they made Spider-Man appear as a hero. [5]

During the Great Hunt, Morlun came to his universe so he fought Morlun, however none of his attacks affected him. Morlun then KO'd Spider-Man with one hit,[1] seemingly killing him.[6]

It was later revealed that Spider-Man survived Morlun's attack, and was part of the team of heroes assembled to attempt to stop the Convergence of the Marvel and Capcom universes. He was assigned by Iron Man to keep tabs on BSAA captain Chris Redfield while he infiltrated an A.I.M.Brella laboratory in order to retrieve the Mind Stone, at the same time revealing that photojournalist Frank West had been trailing them in search of a scoop. The three soon found out A.I.M.Brella was planning on using live test subjects for their experiences, one of them being the Mayor of New Metro City, Mike Haggar. After a brief altercation, Haggar agreed to join them as they fought M.O.D.O.K. and the B.O.W.s developed by A.I.M.Brella, among them the lumbering, deadly creature called Nemesis. While Spider-Man managed to snag the Mind Stone from M.O.D.O.K.'s forehead, they discovered too late what was A.I.M.Brella's objective: to develop a Symbiote-based gigantic bioweapon, which pursued the group of heroes out into the streets of New Metro City. While fighting the giant creature, Spider-Man was briefly infected by the Symbiote, only stopped when Frank broke into a parked car, triggering its alarm and causing the Symbiote splinter to disperse from Spider-Man's body.

He is later present among the heroes at the direct assault on Ultron Sigma's stronghold in Xgard.[7]

Like this? Let us know!
Retrieved from "https://marvel.fandom.com/wiki/Peter_Parker_(Earth-30847)?oldid=6464236"
Community content is available under CC-BY-SA unless otherwise noted.