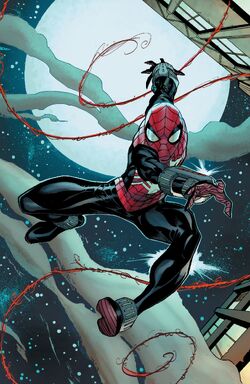 Hey, it's our guilt! Plenty to go around... And this world isn't so bad. There are good people, and hopefully more good people as we go. You said it yourself when you were fighting Osborn. You'll beat him in every timeline, in every single way... Which means I'll beat him. Thank you, Peter. You showed me what I could be. Showed me who I am... I am Spider-Man.

During the early days of his career as Spider-Man, Peter Parker was visited by his future self from the Prime Marvel Universe, who had traveled to this timeline alongside Teresa Durand and J. Jonah Jameson in hopes to find the notes the Tinkerer had on the Vedomi before they were lost, in order to stop the ongoing Vedomi invasion in their timeline.

While Teresa and Jameson started working on finding any leads on the Tinkerer before his next recorded appearance, Peter was taken by his future self on patrol, so that they could together defeat different villains that would cause him trouble in the future. Together, the Spider-Men stopped Doctor Octopus from breaking out of the New York State Prison, and defeated the Green Goblin and exposed his identity to the police.[1]

The following day, the Spider-Men went on patrol after learning that the Green Goblin had escaped police custody. In the process, they defeated Mysterio, who enacted a plan to try to drive Spider-Man mad. When Peter returned home, he was attacked by the Green Goblin, who had learned of Peter's real identity through J. Jonah Jameson.[2]

Peter and May were taken to the George Washington Bridge, where Osborn lured Peter's future self. When the older Peter arrived, Osborn fought him aboard his Goblin Glider with Peter bound on tow. In the middle of the battle, Osborn detonated explosives he had set in the bridge, launching May into the air. Peter broke free from Osborn's rope and webbed a net with which he saved his aunt. In the meantime, Osborn was defeated by future Peter. When they all returned home, Peter overheard his future self talking with Teresa about his life getting worse. Because of this, Peter decided to give up on being Spider-Man. Not long afterwards, the time-travellers prepared to leave and return to their time.[3]

As a result of giving up on being Spider-Man, Peter had a very successful career as an inventor. He founded Parker Industries and married Gwen Stacy. In the meantime, Norman Osborn had been reformed, and backed his son Harry in politics. The Osborns' control over the media and the people resulted in a totalitarian system, with only a handful of heroes left to fight against it. Peter decided to avoid antagonizing the system, instead focusing on on making low-cost technology for the world. On the other hand, Gwen tried to help the Resistance in every way she could.

When Spider-Man, Jameson and Teresa attempted to return to their world, they instead jumped forward within the same timeline. As soon as they noticed something was off, they sought Peter's help at his company's tower. He told them he had quit being Spider-Man, and refused helping them. However, after Gwen berated him for cowering and she decided to go help the Resistance on her own,[4] Peter decided to become Spider-Man again. Peter joined Gwen in helping the Resistance fend off Norman Osborn's forces after they were surrounded at an Oscorp warehouse where Doctor Doom was setting up a Time Platform to return Spider-Man and his allies to their timeline. Osborn retreated following the defeat of his army. Spider-Man was initially reluctant to return immediately to his timeline, but Peter assured him they were going to find more people to fight against Osborn. Before his counterpart left, Peter thanked him for showing him what he could be and who he was: Spider-Man.[5]

Spider-Man continued fighting against Osborn's syndicate, putting it to an end following a brutal fight during which Peter defeated Osborn and his allies.[6] Peter would eventually die at some point in the future, with a billions-year old immortal Sandman mentioning having watched Spider-Man die when he travelled back in time to the Prime Marvel Universe and confronted Spider-Man's self from that reality.[7]

Like this? Let us know!
Retrieved from "https://marvel.fandom.com/wiki/Peter_Parker_(Earth-51838)?oldid=5595855"
Community content is available under CC-BY-SA unless otherwise noted.