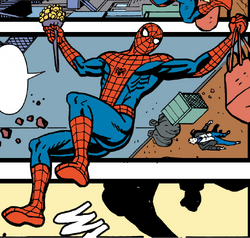 My tummy's rumbling for some of those delicious Hostess-Brand fruit pies!

This Spider-Man, like the other heroes in his reality, defeated many enemies with Hostess-brand Cakes. He arrested many villians using little to no violence, and made them stop fighting by giving them pastries.

He was later killed by Morlun while he was on his way to a date with Mary Jane.[2]

Like this? Let us know!
Retrieved from "https://marvel.fandom.com/wiki/Peter_Parker_(Earth-51914)?oldid=6490725"
Community content is available under CC-BY-SA unless otherwise noted.