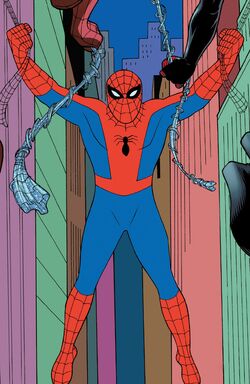 When in the Daily Bugle, Peter Parker learned from J. Jonah Jameson that two Spider-Men were spotted swinging around in New York City; Peter Parker from Earth-12041 and Miles Morales from Earth-1610.

As Spider-Man, Peter set out to encounter whom he believed to be impostors. He came across the Spider-Men, and attempted to fight them until Miles explained that they came from other dimensions. Spider-Man believed him because he had met a bunch of Spider-People from another planet earlier in his life, so it was believable.

Spider-Man was told about the Inheritors, and was willing to help fight them, but before that, he couldn't leave unfinished his task of finding the recently-escaped Noah Boddy.

Noah Boddy and a group of Spider-Man's most dangerous enemies appeared immediately. During the fight against his foes, the Spider-Men were taken by surprise and incapacitated by Noah's Futuro-Rifle. When Noah Boddy prepared to kill the Spider-Men, Spider-Man's other enemies discussed about who should be the one to kill Spider-Man. While they were discussing, Spider-Man suggested his fellow Spider-Men a way to defeat the criminals, by turning each other against themselves. Earth-12041's Spider-Man used his web to make the Green Goblin trip, which was seen as an attempted attack by Noah Boddy. As Noah used his Futuro-Rifle to defeat two of his presumed traitors, Miles snuck up on him and used his venom blast to knock him out. Meanwile, the remaining two enemies were beaten out by the other two Spider-Men.

After delivering the villains to the police, Spider-Man told his counterparts that he should inform the people close to him that he wouldn't be around for a while. As Peter Parker, Spider-Man told Aunt May he was going to a road trip, while the Peter Parker of Earth-12041 impersonated him to tell Jameson about his absence.

Once reunited, the three Spider-Man prepared to depart this universe.[1]

How dare you point at me!

Spider-Man 2099 visited Peter's reality and made an attempt to recruit him. But after pointing at Miguel, he pointed back and they had an argument about who pointed first.[2]

Retrieved from "https://marvel.fandom.com/wiki/Peter_Parker_(Earth-67)?oldid=6493342"
Community content is available under CC-BY-SA unless otherwise noted.