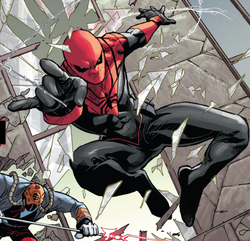 Newsflash: I'm not the "Friendly Neighborhood Spider-Man" anymore. Some folks need killing, and this monster's a prime example.

In this universe, Spider-Man became an assassin working alongside Wolverine. He has left his ex-girlfriend Mary Jane for a woman named Alex who greatly resembles Gwen Stacy.[1]

When a danger came to the Spider-Men of the Multiverse, Spider-Man (Otto Octavius) sought him out among others to fight off the threat.[2]

He was among the other spiders who greeted Spider-Man Noir when he joined Octavius' army,[3] and was later one of the spiders who tried to defeat Karn on Earth-2818. However, Brix and Bora arrived, forcing the spider-people to retreat back to 2099 AD.[4]

When the other team came to recruit him and Octavius' Spider-Army, he died in the jaws of Daemos' clone.[5]

Assumed to have more physical strength than his 616 counterpart as a result of his training.[1]

Presumably the same as his Earth-616 counterpart.

Like this? Let us know!
Retrieved from "https://marvel.fandom.com/wiki/Peter_Parker_(Earth-8351)?oldid=6464370"
Community content is available under CC-BY-SA unless otherwise noted.