watch 04:15
Spider-Man: Adversity, the Everyman, and Our Best Selves
Do you like this video?
Play Sound 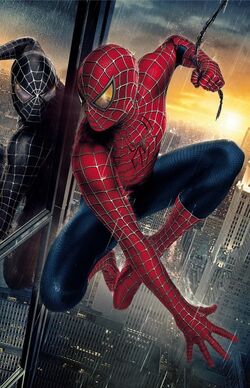 Whatever life holds in store for me, I will never forget these words: "With great power comes great responsibility." This is my gift, my curse. Who am I? I'm Spider-Man.

Peter Parker was a brilliant but socially inept student. After being orphaned Peter moved in with his Uncle Ben and Aunt May. While attending a field trip Peter was bitten by a genetically modified spider and gained spider-like abilities.

He then used his powers to become a masked wrestler to earn money and impress his next-door neighbor Mary Jane Watson. However, when the owner of the wrestling ring refused to pay him he allowed a thief (who had just robbed the owner) to escape. Unbeknownst that thief would go on to kill his Uncle Ben. Overcome with guilt Peter remembered his Uncle Ben's words of wisdom, "With great power comes great responsibility", which inspired Peter to become Spider-Man. While as Spider-Man Peter got a job as a photographer for the Daily Bugle. The owner J. Jonah Jameson ironically had a deep hatred towards the web-slinger however. Peter's close friend Harry's father would transform himself into the Green Goblin during a lab accident. Peter would confront the Goblin unaware he was Norman Osborn. The two battled at a parade where Osborn attacked but Peter managed to drive him off. Later Osborn asked him if he would join him and help him take over New York. When Peter declined, Osborn told him that eventually, the people of the city would turn on him. Afterward, Osborn learned Peter's dual identity and attacked Aunt May. Enraged, Peter confronted him and learns that Osborn had kidnapped Mary Jane. In the battle that came Norman was killed and before dying asked Peter not to tell Harry. Peter then brought his body to Osborn's home in time for Harry to see him. He fled as Harry vowed vengeance. Peter attended Norman's funeral declaring himself as Spider-Man.[1]

Two years later, Peter faced new challenges as he struggled to cope with "the gift and the curse" of his powers while balancing his dual identities as the elusive superhero Spider-Man and the life as a college student. Relationships that Peter held most dear were now in danger of unraveling as he clashed with the multi-tentacled villain Dr. Otto Octavius, also known as "Doc Ock", his old idol who had been driven insane thanks to an explosion that killed his wife and melded the mechanical tentacles of his invention to his body. Peter's life-long yearning for MJ became even stronger as he fought the impulse to abandon his secret life and declare his love. In the meantime, MJ had moved on with her life. She embarked on an acting career and had a new man in her life whom she intended to marry. Peter's relationship with his best friend Harry Osborn has been overshadowed by Harry's growing vendetta against Spider-Man, whom he held responsible for his father's death. After a fight with Octavius plus all the emotions caused Peter to begin to lose his Spider powers. Eventually, he decided he no longer wished to be Spider-Man. However, when Doc Ock kidnapped Mary Jane to bait Spider-Man, Peter had no choice but to accept his fate and harness all his superhero talents to stop the diabolical madman Doc Ock's quest for infinite nuclear power. Peter met Ock at his base and the two battled. Peter defeated him and managed to convince Octavius to regain control over his arms. Otto later sacrificed his life to stop the unstable nuclear core. Afterward, Peter revealed himself as Spider-Man so Mary Jane called off her wedding and decided she wanted to be with him.[2]

Later life went easier for him. The city began to embrace him for the first time in his career, he was once again the top of his class and he was planning to propose to Mary Jane. However, his friend Harry who had learned his secret attacked him. Peter was forced to defend himself and knock Harry out. Peter would learn that the head injury would give Harry amnesia. Around this time, he discovered that the real killer of his uncle was Flint Marko, who later became the Sandman. While on a date with Mary Jane, a alien symbiote attached itself to Peter Parker's costume. It increased his strength but influenced his behavior for the worst. He fought Marko again and seemingly killed him. Once Harry regained his memory Peter and he fought, this time ending with Peter disfiguring Harry's face with a pumpkin bomb.

After some time, Peter got rid of the symbiotic costume when he learned it was slowly corrupting him, but the symbiote would survive after nearly being destroyed by Peter and bonded itself to Eddie Brock, creating the monster called Venom. The monstrous Venom kidnapped Mary Jane, and when Spider-Man attempted to save her he was brutally beaten by the combined powers of Venom and Sandman. He was saved by Harry, who had seen the error of his ways and decided to help Peter fight Sandman and Venom. When Venom attempted to impale Peter, Harry jumped in front of the glider, mirroring the way his father died. Peter then used one of Harry's pumpkin bombs that ended up annihilating both the symbiote and Eddie Brock (whom Peter tried to save despite everything that Brock had put him through). In the end, he forgave Marko for killing his uncle.[3]

Peter was one of many Spider-Totems that appeared in Master Weaver's Web.[4] Peter was mentioned to have joined the Spider-Army to oppose the Inheritors on Earth-001.[5]

Peter has gone from a science whiz in high school to a laboratory assistant of Dr. Connors and a brilliant Columbia University physics student who is at the top of his class as he becomes secure with his dual roles. His knowledge of science has impressed the likes of Norman Osborn, Otto Octavius, and the aforementioned Dr. Connors. Considered a genius by Harry and Gwen, he has shown himself to be knowledgeable in mechanics, quantum mechanics, photonics, nuclear fusion, acoustics, and nanotechnology.

Like this? Let us know!
Retrieved from "https://marvel.fandom.com/wiki/Peter_Parker_(Earth-96283)?oldid=6465279"
Community content is available under CC-BY-SA unless otherwise noted.