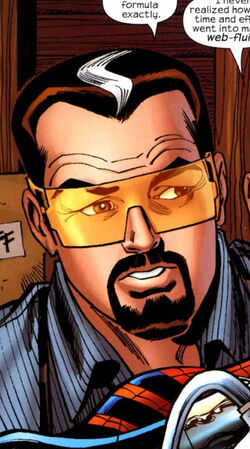 A home. A family. That was his dream. All he ever wanted.

Peter's life was the same as his Earth-616 counterpart up until the point in the Clone Saga during which Mary Jane Watson went into labor early.

After witnessing the birth of May, Peter began to contemplate giving up the mantle of Spider-Man in order to better protect her and Mary Jane. Two years after May's birth, Peter had a dramatic final conflict with The Green Goblin which left Norman dead and Peter with the loss of his left leg. With a prosthetic leg in place, Peter could no longer continue on as Spider-Man, even though he retained much of his former powers and does so to this day.

Peter went back to school and finished his degree, most likely leaving the Daily Bugle since Spider-Man no longer was around to be photographed. He eventually landed a job in Queens in New York City at the Midtown South Police station. Currently, he works in the crime lab at the station with long-time assistant Phil Urich.

Peter has returned to his masked identities on several occasions either to help his daughter or because he was asked to by an old friend.

He unfortunately died protecting May and Benjy from Daemos. As Daemos drained Peter's life force, May fled with Ben in her arms.[2] Upon May's return home, Mary Jane passes Peter's former costume down to her.[3] A year later, the Multiversal entity known as The Other sought Peter as its host, thus resurrecting him.[1]

Peter retains most of the same powers he had as Spider-Man prior to his fateful battle with the Green Goblin which cost him his leg. Now with a prosthetic leg and normal aging, some of these powers have diminished but are still present, such as his Spider-sense. For a complete list of current and past powers, see Earth-616's Spider-Man's Powers.

Peter Parker is a gifted scientist.

Peter is missing a leg. His artificial leg slows him down, most notably because it lacks his ability to stick to other surfaces when he is wall-crawling.

Like this? Let us know!
Retrieved from "https://marvel.fandom.com/wiki/Peter_Parker_(Earth-982)?oldid=6466039"
Community content is available under CC-BY-SA unless otherwise noted.