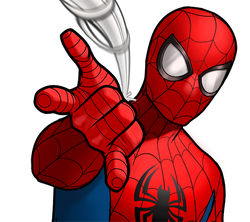 Am I supposed to say something funny or something heroic right here? I already ruined the moment, didn't I? Let's just pretend this never happened...

At his school Peter was known as a genius young inventor.

Due to an Hydra invasion, Iron Man and Captain America, got into a conflict on how to properly defend the Avengers Academy from Hydra, due to their different ideologies they split the Academy into two camps.

The machine that attacked the Academy had captured a number of super heroes, Peter was one of them, he was eventually freed along with the other heroes by the Academy students.

On Iron Man camp he created an army of robots called the Iron Legion to help protect the Academy, to improve his designs he hired as his assistant at Stark Industries, so Peter joined Team Iron Man and was later invited to also join the Avengers Academy by Iron Man.

Spider-Man was incriminated by the Sinister Six of a series of crimes around New York. They used a replica of his Spider webs to commit those crimes, and frame him. When J. Jonah Jameson, decided to investigate te crimes, and expose Spider-Man identity. Without revealing his secret identity, Peter Parker started working at the Daily Bugle with the intent of investigating the situation himself, and clear Spider-Man name. After noticing Peter investigating the case.

Seemingly those of Peter Parker of Earth-616

Seemingly those of Peter Parker of Earth-616

Seemingly the same as Peter Parker of Earth-616

Like this? Let us know!
Retrieved from "https://marvel.fandom.com/wiki/Peter_Parker_(Earth-TRN562)?oldid=6100521"
Community content is available under CC-BY-SA unless otherwise noted.