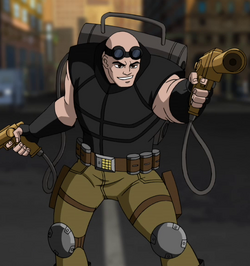 Peter Petruski alias the Trapster is a criminal that uses a special Paste-Gun to commit crimes. He's a member of the Frightful Four along with the Wizard, Klaw and Thundra. He battled Spider-Man by his own, being defeated.[1] During the fight, he implanted a tracer in the hero, which helped the other members of the team to known his location and attack Peter Parker's high school.[2]. He is the kept in S.H.I.E.L.D custody.[3][4] Trapster is seen again when Spider-Man is fighting Venom.[5]

Trapster fights Spider-Man at school where he grabs Mary Jane Watson. Mary Jane breaks free as Trapster continues the fight Spider-Man. One week ago, it was shown that Principal Coulson had established Mary Jane's play on where Trapster mistakes Flash Thompson as Spider-Man during a museum robbery. Trapster manages to use his gun to trap Peter Parker under a museum statue when he gets Flash out of the way. After getting out, Peter Parker gets out of sight and uses his web-shooters to help Flash fend off Trapster who ends up retreating. Trapster attacks Flash on opening night causing Peter Parker to don a duplicate Spider-Man cartoon in order to fight Trapster. This fight is brought to the stage in the midst of the Spider-Man play. Agent Coulson had to play along to keep the audience from going into a panic. It soon get to the part where this episode comes in where Trapster grabs Mary Jane. Mary Jane breaks free as Trapster continues the fight Spider-Man. Spider-Man flings Trapster through the wall and traps Trapster with his own Paste-Gun. Flash later told the audience that Peter saved the night from an actual attack from Trapster. When Flash starts singing, Trapster begs Peter to take him to jail so that he wouldn't put up with Flash's singing.[7]

Trapster was shown in the midst of a bank robbery when Captain America's Shield hits his glue pack causing the glue to cover Trapster enough to be apprehended by the police.[8]

Trapster, Wizard and Klaw battle the Avengers member Hawkeye. They are easily defeated and attached to a wall as he waits for the police.[10]

Seemingly those of the Peter Petruski of Earth-616.

Like this? Let us know!
Retrieved from "https://marvel.fandom.com/wiki/Peter_Petruski_(Earth-12041)?oldid=5722648"
Community content is available under CC-BY-SA unless otherwise noted.