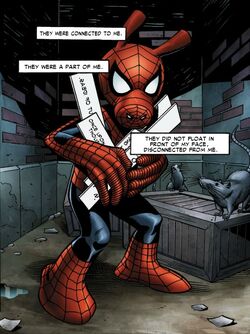 The Peter Porker of this reality existed alongside human superheroes. He found himself without ideas which he attributed to his lack of thought balloons. Gathering up all the floating disconnected thoughts in boxes where narration normally goes in a comic he set off in search of them. While other heroes were enmeshed in Civil War, he asked for Doctor Strange's help but accidentally got caught up in a spell which badly reacted to his non-kosher nature. He was thrown across realities and experienced the lives of his parallel selves. Strange located him and restored him to his own reality before he could do any more damage to copyrights. He stole the thought balloons from two rats in Spider-Man and Venom costumes but this resulted in him experiencing the life of the Zombie Ham of Earth-7044.[1]

None displayed. Presumably those of Peter Porker of Earth-8311.

Like this? Let us know!
Retrieved from "https://marvel.fandom.com/wiki/Peter_Porker_(Earth-7231)?oldid=5502148"
Community content is available under CC-BY-SA unless otherwise noted.