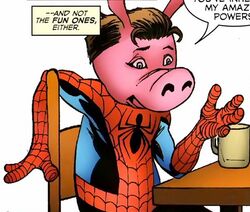 Peter Porker operates as Spider-Ham with his daughter May Porker, unlike his Earth-8311 counterpart this version was an anthropomorphic pig who gained his powers from the bite of a radioactive spider. Sometime during his career as Spider-Ham he lost his right foot and had a bionic one installed and later helped raise his daughter, who inherited his powers. When she was a teenager, Peter was kidnapped by Norman Osbird Jr. and had to be rescued by her. Peter tried to enforce she wouldn't perform anymore heroic acts but she was seemingly not listening.[1]

Seemingly those of Spider-Man (Peter Parker) of Earth-616

Like this? Let us know!
Retrieved from "https://marvel.fandom.com/wiki/Peter_Porker_(Earth-94024)?oldid=5860721"
Community content is available under CC-BY-SA unless otherwise noted.