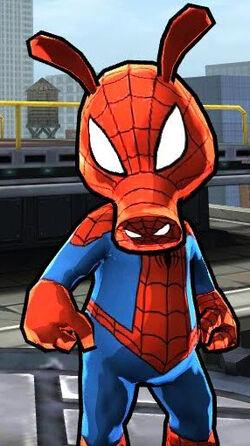 You meet all sorts of characters when you're hopping dimensions. some are pretty chicken, but some are ready to dive into the action and go hog wild!

Peter the Spider lived in the basement of mad scientist May Porker. After accidentally becoming radioactive, May bit Peter, turning him into a pig like herself. Suffering from a head injury, she believed Peter to be her nephew and he subsequently took her surname. Discovering he retained his spider-abilities, he called himself Spider-Ham and began a life of crime fighting. He founded the Spider-Ham Family, a group of crime fighting anthropomorphic pigs.

While battling the Green Gobbler, the villain was pulled through a portal. Following him, the team found themselves on Earth; the portal being activated by the Green Goblin. Spider-Man quickly came in contact with them and recruited them into the Spider-Men to battle the multiversal Sinister Six, whom Gobbler had joined.

Peter was among Earth's heroes who had registered under the Superhuman Registration Act.[1]

Like this? Let us know!
Retrieved from "https://marvel.fandom.com/wiki/Peter_Porker_(Earth-TRN461)?oldid=6058407"
Community content is available under CC-BY-SA unless otherwise noted.