Peter Quill, alias Star-Lord, was born during an unusual astronomical phenomenon when many of the planets aligned. Seeing no resemblance, the man who believed he was Quill's father angrily accused his wife Meredith of infidelity and attempts to kill the infant, but died of a sudden heart attack. Quill was raised by his single mother, Meredith.

One day Peter saw an Ariguan spaceship land. He went to get his mother who was killed by the aliens after they discovered them. When he told the police his mother had been killed by aliens, no one believed him and he was put in a state orphanage. He ran off when he was fifteen and eventually became a trainee NASA astronaut. When the alien entity called the Master of the Sun visited the space station that Quill was stationed at and offered the mantle of Star Lord (an interplanetary policeman) to a worthy candidate, Quill volunteered, but was rejected in favor of another astronaut. 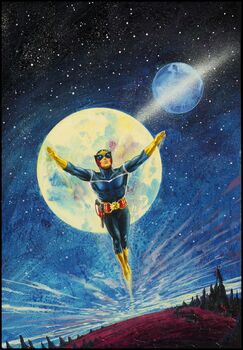 Quill was outraged, and NASA ordered his return to Earth and discharge for his conduct. Peter, however, stole a scoutship, and on returning to the space station took his colleague's place. Quill was then chosen to become Star-Lord, with the Master of the Sun first creating an illusion in which he was able to find and kill the aliens that murdered his mother to free him of his past. Equipped with a sentient vessel called "Ship", Quill commenced his role as Star-Lord.[1]

Human/Spartoi Hybrid: Peter Quill is son of a human and a Spartoi, and his hybrid physiology grants him peak human abilities, such as:

Expert Marksman: Star-Lord is well-versed in the use of firearms, from all over the Galaxy

Martial Artist: Star-Lord is an expert in hand-to-hand combat being very skilled in multiple fighting styles.

Master Tactician and Strategist: Star-Lord is a master strategist and problem solver and skilled in battle techniques.

Universal Knowledge: Star-Lord has extensive knowledge on various alien customs, societies and cultures, as well as various knowledge about cosmic abstracts such as Oblivion.

Star-Lord Armor: Peter Quill wears a suit that grants augmented strength and durability and the ability to travel through space with ease.

Link with Ship: He is also psionically linked to his starship, "Ship", which is a living entity.

Element Gun: a pistol capable of conjuring one of the four elements.

Retrieved from "https://marvel.fandom.com/wiki/Peter_Quill_(Earth-791)?oldid=5268936"
Community content is available under CC-BY-SA unless otherwise noted.