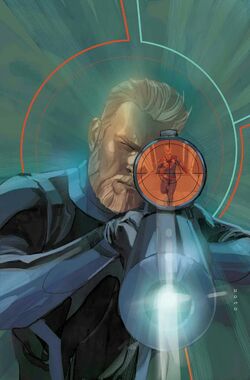 Peter Quill aka "Lord Starkill" was a wanted space pirate, leader of the Ravagers and the personal nemesis of the Corporal Carol Danvers, leader of the rival Zeta Flight pirates. He was hired by Thanos the Just, a wise and noble peacekeeper, to recover for him the Reality Stone which was displaced into their universe from another one.[1] On the plaet Gaia Quill lay in wait for Doctor Eve and her Mim Unit to emerge from a ancient temple with the reality stone, at which point he shot both from a safe distance with his Elemental Rifle and took the Stone from them.[2]

On the way back to his hideout Quill contacted his employer, much to Thanos' dismay as he could not afford to be caught associating with lowlifes such as Quill. Soon after he got back, the hideout was attacked by the Zetas, aided by the Widower. The Ravagers fought back and restrained the entire team, after which Lord Starkill of selling his nemesis and her crew to Thanos in order to clear his own name.[1] However, the rest of the Ravagers found his plan extremely dangerous and foolhardy. The Zetas have grown tired of their leader Danvers acting weirdly as well and so the two group sided together in a shared mutiny against their captains. Starkill was thrown in a same cell with his nemesis until they wre both delivered to Titan and brought to stand justice before Thanos. He found the lives of two criminals incapable of redemption worth nothing to hand over in exchange until Rockette revealed the Reality Stone taken from Quill. Seeing what he did not truly believe existed until now, Thanos ordered every pirate seizes and announced his intention to use the Stone to rid of the galaxy of all who pirate and pillage like they do.[3]

Upon hearing that, Widover and the other attacked Thanos' forces and helped both captains escape back to the ship, seemingly merging into one super-sized group. Before Starkill and Danvers could catch a breath, they were interrupted by Doctor Eve who turned up in his cockpit and demanded the Stone which he took from her.[3] Quill tried to smooth-talk her, but she stunned him and he did not wake up until Eve had stolen another ship, taking Danvers with her. Seeing as how the Stone as their only loot from the etire endeavor, Starkill ordered the combined crew to follow the stolen ship, which took them to Hala.[4]

Like this? Let us know!
Retrieved from "https://marvel.fandom.com/wiki/Peter_Quill_(Earth-TRN837)?oldid=5803849"
Community content is available under CC-BY-SA unless otherwise noted.