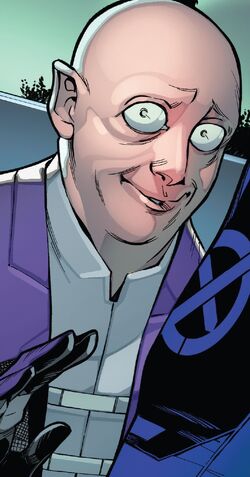 Peter Quinn was recruited by Magneto to be part of his new Brotherhood of Evil Mutants. He took the name Peeper and joined Slither, Shocker, Lifter, and Burner. After failing their mission and being defeated by Captain America, Magneto abandoned them.[1]

The group changed their name to Mutant Force and offered their services to the Mandrill and battled the Defenders for him. Peeper became the field leader of the team, his powers allowing him to see his enemy's movements and plan for them. Despite being successful at first in defeating the Defenders and capturing the female Defenders so that the Mandrill could enslave them, the group was defeated by the Defenders during their third encounter.[2] Mutant Force was arrested, but they bargained with the U.S. government and became their agents in exchange for their presidential pardon. Their tenure as government agents was short.[3]

The Red Skull became the group's new sponsor. Now calling themselves the Resistants, they operated as a group advocating mutant rights. Slither left the group at this time. To avoid being associated with their old criminal group, many of the members changed their identities. Peeper now called himself Occult and wore a helmet to hide his features. The group fought Captain America (now John Walker) in opposition to the Mutant Registration Act.[4] They were soon joined by various new members, including Mentallo who posed as "Think Tank". This time, they came into conflict with Freedom Force, a group who ironically enough, had been another incarnation of the Brotherhood of Evil Mutants, but had now become government agents.

The new Captain America, John Walker, lost control during the battle and seemingly killed Occult along with several other members of the Resistants due to his recent violent streak as the result of the death of his parents at the hand of the Watchdogs, another group the Red Skull had formed to discredit the image of Captain America. During the fight, Quinn was seriously injured after hitting power lines and believed dead.[5]

These injuries may have been the cause of his later mental problems: in his next appearance, Quinn would never speak. Another mission as the Resistants was a failure as well,[6] so the team changed its name back to Mutant Force, but by now Peeper was becoming afraid during combat.[7] Mutant Force was defeated and Quinn, now calling himself Peepers, was imprisoned at The Cage. Wolverine and the Beast met him and befriended Peepers, who by now was a stuttering, nervous mutant who had become mentally unbalanced. Peepers repeatedly stabbed a prisoner who tried to kill Beast at this time.[8] Shortly afterwards he was released and became a bartender at Satan's Circus, a bar for supervillains.[9]

During the aftermath of M-Day, Peepers was seen with Mammomax and Erg on the run from the Sapien League. He commented that the X-Men hated them but Mammomax replied that the X-Men were heroes and wouldn't turn them away. All three were caught and almost burned alive at the Xavier Institute's doorstep if not for the timely arrival of Wolverine and Colossus. However he became lost in the confusion of the Sapien League's attack and the arrival of the Sentinels, but met up with Outlaw who was also on her way to the Xavier Institute for the promised sanctuary. The two became caught up in the fight between the Sapien League, the O*N*E soldiers, and the X-Men all before reaching the mansion. Peeper stayed quiet and out of the way of most of the other members of the 198. He was one of the mutants that receives a "tracking" chip and then later had it removed by Mr. M and followed him when he led his exodus from the institute.

Sometime later Peepers was seen driving a car and calling X-Factor Investigations. Siryn answered and he told her that he thought he was being followed. Predator X appeared at that moment and Peepers crashed his car. As he recovered, Predator X attacked and devoured him as he screamed. Later, Siryn travelled to the accident site, and was horrified upon finding Peepers' scattered remains.[10] Peepers was shown, years later, alive and well again for unknown reasons.[11] He appeared as a medical staff member at the rebuilt Ravencroft Institute.[12]

Following the establishment of a mutant-only nation in Krakoa, Peepers resurfaced as a member of S.W.O.R.D.'s mutant sub-team The Six under the command of Abigail Brand. Magneto was pleasantly surprised to see his Brotherhood follower from years earlier now as a member of the Six and asked if they would properly catch up, which Peepers delightedly agreed.[13]

Like this? Let us know!
Retrieved from "https://marvel.fandom.com/wiki/Peter_Quinn_(Earth-616)?oldid=6501094"
Community content is available under CC-BY-SA unless otherwise noted.