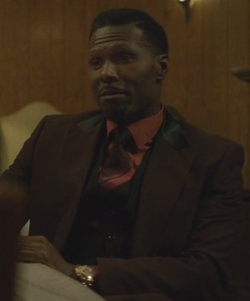 Peter Stokes was the brother to Samuel Stokes who, alongside his sister in-law Mabel Stokes, established a crime empire in Harlem through many activities with the exception of drug production and distribution. After the death of his brother, he arranged a settlement with the McIver family whom were to take half of their assets surrounding Harlem's Paradise and the demise of Quincy McIver.[1]

While he worked as Mabel's right hand in controlling the Stoke's fortunes, Peter saw musical potentials in his nephew Cornell Stokes, setting him to auditions against Mabel's wishes. When Pop suggested that Cornell joined him and Donnie in the streets, Peter expressed that his nephew focused on music instead, though Mabel ordered for him to join in killing Donnie for selling drugs.

Conversely, Peter sexually abused his niece Mariah Stokes, which prompted Mabel to send her away to prevent further assaults.

In an act of rebellion to remove himself from Mabel's authority, Peter conspired with Salvador Colon to involve the Stokes family with drug trafficking. Upon the discovery of this, Mabel ordered for Cornell to shoot him for his betrayal. His death never left his nephew who, years later, continued to defend Peter.[2]

Like this? Let us know!
Retrieved from "https://marvel.fandom.com/wiki/Peter_Stokes_(Earth-199999)?oldid=5546955"
Community content is available under CC-BY-SA unless otherwise noted.