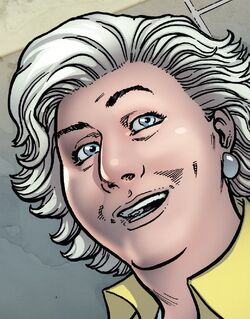 "Penny" was the nurse to Ben Grimm's uncle, Jacob Grimm, who was recuperating from an accident which took the life of his wife. Petunia married the much Jacob and together they helped raised the orphaned Ben Grimm. Petunia and her husband later moved to Benson, Arizona, where they worked in a small clinic.[2]

Petunia kept contact with Ben during his Fantastic Four days, sending him once a striped tie which was not at all of his liking.[3] Eventually, Petunia visited New York City to ask the Fantastic Four to help with a mystery in her hometown of Benson. This was the first time other members of the Fantastic Four had met Ben's oft mentioned aunt.[2]

When the Fantastic Four were confronted by the Marquis of Death and The Thing taunted him mentioning his Aunt Petunia, the villain teleported himself and Ben to Petunia's home, and abruptly murdered her, turning her to a pile of skeletons.[4] Despite her untimely demise, Petunia resurfaced years later alive, when she attended Ben's wedding with Alicia Masters in the company of Jake.[5]

Like this? Let us know!
Retrieved from "https://marvel.fandom.com/wiki/Petunia_Grimm_(Earth-616)?oldid=6129608"
Community content is available under CC-BY-SA unless otherwise noted.