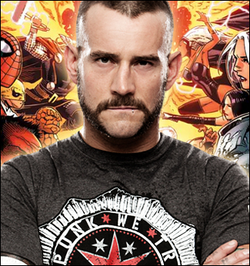 Phillip Jack "Phil" Brooks is best known for his time in WWE as CM Punk. Where he is "the longest-reigning WWE Champion of the modern era" (since Hulk Hogan's 1,474 day reign ended in 1988), having held the title for 434 days from November 20, 2011 to January 27, 2013. Punk's reign is officially recognized as the sixth-longest of all time. Punk won multiple world championships during his 15-year professional wrestling career, including the ROH World Championship and ECW World Championship once each, WWE's World Heavyweight Championship three times, and the WWE Championship twice. He won the World Tag Team Championship (with Kofi Kingston) and the WWE Intercontinental Championship, making him the 19th WWE Triple Crown Champion and the fastest man in WWE history to achieve this feat, in 203 days. He was a two-time ROH World Tag Team Champion (with Colt Cabana as part of the The Second City Saints). Punk also won the 2008 and 2009 Money in the Bank ladder matches (the only wrestler to win the match twice), and the 2011 Superstar of the Year Slammy Award in WWE. Following his retirement from professional wrestling, Punk signed a deal with the Ultimate Fighting Championship (UFC) and began to pursue a career in mixed martial arts, planning to begin fighting in 2015.

In February 2015, CM Punk will make his debut as writer, with the release of a story partially written by him in Thor Annual Vol 4 #1. Punk will also be writing for other Marvel books in 2015.

Like this? Let us know!
Retrieved from "https://marvel.fandom.com/wiki/Phil_Brooks?oldid=5684308"
Community content is available under CC-BY-SA unless otherwise noted.