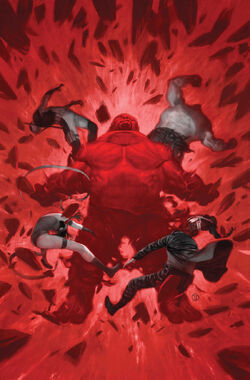 Philip Sterns was a brilliant nuclear physicist, who gained his Phd at Caltech (California Institute of Technology). He studied alongside Bruce Banner, whose genius dwarfed his own. Philip became jealous of Banner, and would later become obsessed with his former classmate.[citation needed]

Philip Sterns developed a deranged love/obsession with Banner's "career" as the Hulk. Sterns subjected himself to a multitude of experiments involving gamma-radiation to emulate his "hero."[citation needed]

This resulted in Sterns turning into a distorted monstrosity. possessed of vast superhuman strength. He also developed multiple personality disorder. From this point on, a much stronger, arguably deranged, personality gave him ‘orders’ to carry out.[citation needed]

Calling himself Madman, Sterns hatched a plot to kill the Hulk, giving him a poison injection that rapidly deteriorated his physical state. This put the Hulk in conflict with various members of his rogues’ gallery, most notably the Abomination, turning weaker and more emaciated for every battle.[citation needed]

Samuel Sterns, the Leader and Philip's brother, came to the Hulk's aid and helped him track down Madman to find the antidote. He explained that Madman "scared him," but he couldn't force himself to kill his brother.[citation needed]

During the ensuing battle, Madman suffered a psychological breakdown, completely submerging his original personality, and Hulk managed to cure himself, as well as poison Madman, leaving the latter on the verge of death, with the remedy dropped barely out of reach.[1]

Later Madman revealed that he simply increased his mass to grab it, and used the time to masquerade as a researcher in the Red Skull's "New World Order" organization. Here he helped to engineer the transformation of a captured S.H.I.E.L.D. agent into the power-mimicking creature known as Piecemeal, and installed a safety override, making it answerable only to himself.[2]

When tracking the creature, he found it in confrontation with the Hulk in the vicinity of Loch Ness, and knocked out his enemy from behind. He dumped the Hulk into the lake saddled with iron weights, but was disappointed when the latter took longer than expected to escape.

During the ensuing gang-up, Madman continued to make disorderly, deranged remarks. When Perseus, a retired Pantheon member the Hulk was visiting, tried to intervene, Madman indifferently killed him, but the Hulk punched him away.[3]

While the Hulk seemingly killed Piecemeal, Madman decided to take off in a stolen jet. The Hulk overtook and started to dismantle the jet, and Madman triggered a pilot-chair parachute, remarking that he was not interested in killing Hulk, since it would be dull to not annoy him anymore, and detonated the plane.

After landing in London, he immediately held the British Prince Charles hostage on top of Buckingham Palace, and demanded to be declared king of England. As Hulk came to the rescue, Madman stated that the latter should understand the demands to use great power and shifted from crying to irreverently upbeat within seconds, dropping the prince towards the ground.

The Hulk later caught up, while Madman was in the middle of a temper tantrum about everybody "ganging up on him," and managed to knock him down. Madman once again voiced his "love"/admiration for Hulk/Banner, but took the opportunity to escape as the London Bridge collapsed underneath them.[4]

At some point Philip had been hired by a revolutionary group to kill the Leader of the country, but betrayed them when he was given a better deal. Using the Gamma Base in the country he tried to find his brother's hidden secrets in his files. When the Thunderbolts came to the country he fought them but was killed by his brother when he whispered something in his ear.[5]

Like the Hulk, Madman has vast superhuman strength. Unlike the Hulk, Madman is unable to become stronger as he becomes angrier, but he is capable of creating significant boosts in his size, density, and power, making him greatly exceed the Hulk's calm state for brief periods of time.

Allegedly being at least twice as strong as the base level of the 'merged'/'professor' incarnation in this mode, and once knocked out the latter with a single punch to the head through the advantage of surprise.[6] He has also claimed to be able to assume many different appearances, including the scientist spying on the "New World Order".[2]

Like this? Let us know!
Retrieved from "https://marvel.fandom.com/wiki/Philip_Sterns_(Earth-616)?oldid=6471050"
Community content is available under CC-BY-SA unless otherwise noted.