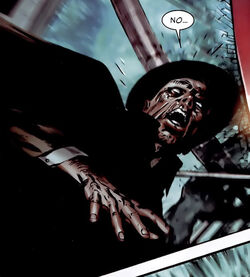 The Man With No Face was a Chinese citizen by the name of Philip Wing. In the 1950s he became a spy for communist China and was sent to the United States. There he developed the identity of the Man With No Face and forced the citizens of New York's Chinatown to send money to China to support their efforts in the Cold War for fear of their family members back home being harmed in retaliation. Those threatened included his own brother, who was a police officer in the Chinatown district who had no idea that his own brother was the Man With No Face. Officer Wing called in the assistance of

However, it appeared that the Man With No Face survived the fall and was brought back to China where he was subjected to experiments by the Chinese in their attempt to create their own super-soldier. Though he gained phasing abilities, he was considered a failure and was used more as a spy. He was in service to Professor Zhang Chin, a scientist who believed that Earth's growing population would put a great strain on their ecosystem.

The Man With No Face defended Chin when the Winter Soldier came to assassinate him. He was able to escape, failing at his mission.[3]

Surviving to the modern age, the Man With No Face was involved in a plan to capture the remains of the original Human Torch. Chin was planning on using his unique DNA and cell structure to create a virus to eradicate half the planet's population. The mercenary, Batroc the Leaper had stolen a number of UN computers pertaining to their target, but ran into interference. The Man With No Face recognized the Winter Soldier from Batroc's photographs, who was now the current Captain America. Eager for a rematch, the Man With No Face fought against his opponent while Batroc's mercenaries retrieved their quarry. However, the Man With No Face was forced to flee when he was shot in the back by Black Widow.[3]

The Man With No Face reappeared in China to protect his master, knowing that Bucky and his allies would try to stop them.[4] In the ensuring fight[5], Chin was killed. Shocked at the death of his leader, the Man With No Face unknowingly rendered himself vulnerable while touching his body, as Namor snapped his neck, seemingly killing him.[6]

Enhanced Intangibility Physiology: The comparative version of the Chinese Super-Soldier, the "Man With No Face" can become tangible at will, normally intangible. He could also turn all or part of his body, allowing projectiles to pass through him without harm. When he passed through living beings, energy discharges caused them intense pain. The Man With No Face could apparently manipulate shadows, allowing him to disappear into and travel through areas of darkness and cause his coat to billow around him.[7]

Spy: Phillip is a trained spy. He sometimes wore facial disguises and could blend into enemy territory without arousing suspicion.[7] Skilled Combatant: Phillip is also a trained fighter, though he relied more on his powers than formal training.[7]

Superhuman Strength: The Man With No Face possesses a degree of superhuman strength and can lift several tons.[7]

The Man With No Face is only tangible when he is touching something or someone. This renders him vulnerable. Also, he can be affected by electricity.[7]

Like this? Let us know!
Retrieved from "https://marvel.fandom.com/wiki/Philip_Wing_(Earth-616)?oldid=6126807"
Community content is available under CC-BY-SA unless otherwise noted.