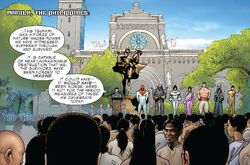 The Philippines is a country located in South East Asia and is a part of the United Nations. It is located in the Western Pacific Ocean. It is made up of 7,641 islands. Its land area is approximately about 300,000 square kilometers. It is the thirteenth most populous country in the world. The capital city of the Philippines is Manila, where the premier superhero team Triumph Division's Triumph Hall is based in.[2]

During the Imperial Japanese sought occupation of the Philippines, they recruited Filipino assassin Ginaldo to travel to the United States to assassinate American soldier Lieutenant Curtis who had obtained information about the Japanese position in the region. Ginaldo was thwarted by the Patriot[3][4].

In 1942, Manila Bay was annexed by the Japanese and their activity was recorded by a popular Caucasian lounge singer named Gi-Gi who was planted there by the American military to gather counter-intelligence. When her position was compromised General Douglas MacArthur enlisted the aid of the Sub-Mariner to rescue her from the enemy[5].

During an R&R with Frank Castle, David Keeton fell in love and soon married a Filipino woman named Maria. At some point while touring the country, they were ambushed by communist rebels. Frank and David let them get close and then used their weapons against them. Afterwards, David vowed never to kill again. He offered Frank to join him to live in peace but Frank declined.[6]

The Punisher, under the name of Mr. Fort, was in a ferryboat going to the Philippines. The boat stopped to provide supply to a nearby boat of refugees when suddenly pirates attacked both ships. They looted the boats while a man named Virgilao was able to stop one. He and a pirate fought until they fell in the water. A shark tried to attack them. The Punisher helped Virgilao and fought off the shark till the pirate and Virgilao rose up to the boat. The Punisher followed then fed the pirate to the shark. When the boat docked, the Punisher was informed by Virgilao of the whereabouts of his war buddy.

Maria Keeton told Frank that her husband was kidnapped by Pirates. Frank with the help of Virgilao baits the Pirates. Virgilao gets captured in the attempt. Frank single-handedly fought the pirates. He met David and he revealed that he was forced to become a pirate out of self-preservation. Frank tossed him to the Shark "to atone" for his sins. He served as a distraction for the sharks that gave Frank enough time to save the captives supposedly to be fed to the sharks. David died after being eaten by the sharks. Several days later, a reward was given for finding the pirate base. Frank insisted in giving it to Virgilao so that he could buy a new boat after his got destroyed.[6]

The Triumph Division was gathered in a single location in Manila, to be honored with a historic monument for saving victims of a major tsunami that had devastated the country. While they were celebrating, a group of monks came to personally thank them for their heroic efforts. Out of the blue, they attacked and blew up the gathered group. All the Triumph Division heroes were apparently killed and it was soon revealed that the monks were actually agents of Ezekiel Stane. Iron Man (who was the Director of S.H.I.E.L.D. at the time) along with Thor, attended the funeral of one of the members.[2] Weeks later, Iron Man visited a new incarnation of the Triumph Division, successors of the late members.[7]

Months later, the new Triumph Division was approached by Pepper Potts and Bethany Cabe, who asked them to help rescue Tony Stark from the Mandarin, and they gladly accepted.[8]

Some time later, the Triumph Division prevented the Macronauts from making a landfall in Quezon City.[9]

During the war between the Inhumans and X-Men, the uncaptured Inhumans Iso, Inferno, Grid, Reader, Ms. Marvel, Quake, Synapse, Mosaic and Moon Girl along with Devil Dinosaur joined forces with Cyclops and Forge to solve the conflict. Forge and Moon Girl were in charge of building the "Terrigen Eater" with Iso providing the parts and tools needed by approaching Ennilux through a favor owed by Ahura. Cyclops, Grid, Mosaic, Ms. Marvel, Quake and Inferno headed out to Iceland, the place that the Terrigen Clouds will make landfall, where they were confronted by the X-Men and other Mutants. Reader and Synapse went to fetch Karnak and Lockjaw from The World. They went next to X-Haven in Limbo to get Medusa, Black Bolt, Crystal, Flint, Naja and Nur. After the rescue, they teleported in one of the islands of the Philippines. [10]

Like this? Let us know!
Retrieved from "https://marvel.fandom.com/wiki/Philippines?oldid=5495329"
Community content is available under CC-BY-SA unless otherwise noted.