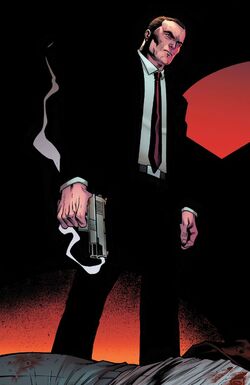 It's not about the size of the artillery. It's about choosing the perfect bullets. Storm, Iron Man, Reed Richards... they all know their own teams inside and out, which is critical--but limiting. I got this job because I'm good at mixing and matching. At studying everyone's strengths and weaknesses and thinking outside the boxes labeled "Avengers" and "Masters of Evil". Remind me to tell you sometime how Quicksilver could kill the Hulk if he wanted to.

Since he was a child, Phil "Cheese" Coulson was obsessed with super heroes. As he grew up, he would constantly study and keep track of them, having created his own database of super humans for fun.[5] He joined the United States Army Rangers, where he befriended Marcus Johnson. During the War of the Serpent, Cheese and Johnson were stationed in Afghanistan, and fought against the fear-induced riots caused by the Serpment when he tried to take over the Earth.[2]

When Johnson's mother was killed, he returned to the U.S.A to be with his friend.[2] But Johnson was the target of Orion to use his blood to regain his immortality, revealing Johnson as the son of Nick Fury. Coulson helped his friend in destroying Leviathan, and was made an Agent of S.H.I.E.L.D. alongside him.[6] He later joined S.H.I.E.L.D.'s Secret Avengers initiative, and was responsible for the recruitment of its first members.[7]

Months after joining S.H.I.E.L.D., Coulson became their supreme commander for Special Ops.[5] In one of the team's first big missions, he faced off against Dormammu to prevent humankind from turning into Mindless Ones. He subsequently freed Doctor Strange from Dormammu's imprisonment, after Strange had helped Coulson put together the pieces in order to find out about Dormammu's secret mission.[8]

Shortly after that, Coulson reached out to his former fiancée Lola Daniels after discovering she was attached to a project stolen from the Pentagon by a mysterious person wearing a counterfeit Iron Man Armor. The project turned out to be a database named the Quantum Drive which contained highly sensitive plans on how to take out every superhero on Earth,[9] created from Coulson's knowledge of superheroes, retrieved directly from his mind years ago by Lola using her secret telepathic powers.

In order to atone for her past actions, and because the Department of Defense didn't want it in the wrong hands either, Lola helped Coulson learn the time and date when an auction for the Quantum Drive was going to be held.[10] Once his agents investigated the place of the auction, Barbuda, Coulson infiltrated the island posing as Wolverine.[11] While the D.O.D.'s operative John Walker won the auction, Coulson stole the drive from him and his agents got their hands on it.[12] However, Coulson was immediately attacked and captured by the counterfeit Iron Man, who turned out to be Coulson's former partner Grant Ward, and now an agent of Hydra. Ward additionally kidnapped Lola, and forced her to extract once again the information used to make the Axiom Protocols so they could be replicated.[13]

While Hydra launched several attacks on superheroes using more knock-off Iron Man suits funded with the profit from the auction, Coulson escaped imprisonement and attempted to stop Ward and his master, Gorgon. Coulson and Lola were soon rescued by Coulson's agents and several superheroes. Ward and Gorgon were eventually defeated, but Lola was killed in the middle of the battle. This incident involving the Axiom Protocols also damaged the trust between Coulson and his team, as they realized Coulson hadn't merely thought of protocols against superheroes, but also his closest allies.[14]

During the early days of the second superhuman Civil War, Coulson and his team were deployed to arrest Iron Man, who had invaded New Attilan to investigate an Inhuman who could profile the future. Knowing the agents were on his trail, Iron Man lured them to one of his bases and tried to convince Coulson to join his cause, explaining him details about the events which Director Maria Hill had omitted. Coulson let Iron Man go free and expressed his willingness to refuse orders if S.H.I.E.L.D. decided to use the Inhuman for proactive justice together with Captain Marvel, for which Hill discharged him.[15]

Via his spy within S.H.I.E.L.D., S.H.E.R.B.I.E., Coulson learned that Captain Marvel was about to conduct another preemptive arrest and tried to prevent that – only to find out that the alleged arrest had been a trap and be arrested himself.[16] Director Hill eventually admitted Coulson's value as an asset, and decided to keep him in lockup until the Civil War blew over, cutting him loose after that. After the D.O.D.'s head General Strakofsky had confessed to Agent Fitz that he planned to illegally sell weapons to Russia, Strakofsky was arrested and Coulson was reinstated as an agent of S.H.I.E.L.D..[17]

When time-travellers arrived from the future to try to kill Captain America, Rogers subdued them with help from Agent Coulson and Deadpool. In the process, Rogers had Deadpool shoot one of the attackers despite having been disarmed. Coulson became suspicious of Captain America and started to investigate him.[18] In reality, Captain America had been secretly supplanted by a fascist version of himself from another timeline.[19] Coulson soon learned that Rogers was involved in a secret plan that consisted of attracting the Chitauri to invade the Earth. When Coulson was en route to a safehouse in his flying car Lola, Rogers ordered Deadpool to kill him, claiming Coulson had gone rogue. Deadpool, convinced that his idol couldn't stand on the wrong side, shot Lola from the sky, chased Coulson to his hideout and shot him in the chest despite's Phil's pleas that he listened to him.[20]

Coulson was returned to life some time after the fall of the fascist Captain America,[21] by the help of Mephisto.[22] The trauma that resulted from his death turned Phil into a cynic, disillusioning him of superheroes.[23] Following the appointment of Wakanda's king Black Panther as chairman of the Avengers, US government agent Thunderbolt Ross determined that it would be harder for the United States to turn to the Avengers to act in their interests. In response to this, Ross called in Coulson to build a government-sanctioned super-team, the Squadron Supreme of America.[21]

Like this? Let us know!
Retrieved from "https://marvel.fandom.com/wiki/Phillip_Coulson_(Earth-616)?oldid=6078423"
Community content is available under CC-BY-SA unless otherwise noted.