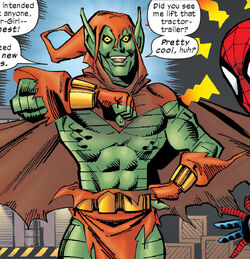 Normie wanted to make amends of all the crimes the Osborns had committed over the years-- and I swore I'd make him proud!

Prior to What If Volume 2 105, Phil's life was the same as Green Goblin (Phil Urich) up until the point in the Clone Saga during which Mary Jane Watson went into labor early.[citation needed]

After trying his hand at being the Green Goblin, Phil attempted another hero and dubbed himself the Blue Wail. When this didn't pan out either, he went into law enforcement to keep himself active in crime fighting. He became crime lab partners with Peter Parker shortly thereafter and worked with him at Midtown South Police Station for around a decade.[citation needed]

When May began to show signs of inheriting the Spider-Man mantle and started to ask questions about the original Spider-Man, Phil noticed webbing at a crime scene[1]. Not long afterward, he confronted May with his own "heroic" past.[2]

In the MC2 timeline, Phil Urich marries his girlfriend Meredith and becomes a forensic scientist and friends with Peter Parker. He is aware of both Peter and Spider-Girl's identities. Phil Urich resumes the Goblin identity, first under the name of the Golden Goblin, then as the Green Goblin with the assistance of Normie Osborn. After Phil lost a long series of battles, Normie recreates Phil's original mask, which grants him superhuman strength and other abilities, greatly enhancing his effectiveness. He is also a founding member of the New New Warriors.[citation needed]

While Phil originally required the technology in the Goblin mask to enhance his physical abilities and no longer has access to it, he retained one power that he is able to activate without the mask. Phil is capable of using his laughter as a sonic weapon of sorts. His "lunatic laugh" has been shown to disorient opponents and even shatter their eardrums. He once used the laugh while out of costume to defeat the Venom symbiote after it had taken possession of Peter Parker.[citation needed]

Lunatic Laugh: A disorienting sonic scream that can weaken the Venom symbiote and shatter eardrums. Though it officially surfaced when Phil received his Goblin powers, he retained the ability after he lost everything else.

Thanks to Normie, Phil also came to again possess all of his original Goblin powers through the use of a Goblin Mask:[3]

Naive: Phil can be a little too optimistic, and has a bad tendency to rush into battle he's vastly unprepared for, or generally bites off more than he can chew. This has come back to hurt him on several occasions.

Goblin Suit: The current iteration of the Goblin suit worn by Phil was designed specifically for Phil by Normie[3] using his grandfather's blueprints[4], and was created by Normie and a team of Osborn Corporation engineers.[5]

Unlike Phil's original glider, this one doesn't appear to be equipped with heat-seeking missiles, machine guns and retractable blades.

Bag of Tricks filled with pumpkin bombs, goblin grabbers, and whatever other goodies Normie builds for him

Like this? Let us know!
Retrieved from "https://marvel.fandom.com/wiki/Phillip_Urich_(Earth-982)?oldid=6020474"
Community content is available under CC-BY-SA unless otherwise noted.