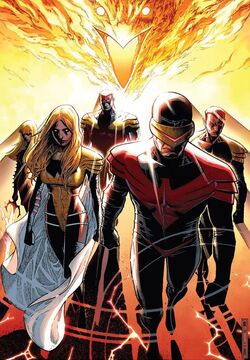 Base of Operations
Utopia
Affiliations

Origin
When Iron Man tried to destroy the Phoenix Force, he splintered it into five pieces, which took the five X-Men of the Extinction Team as hosts.

Place of Formation
Blue Area of the Moon, Earth's Moon

From this day forward, we declare no more war. Pax Utopia.

After the Phoenix Force was split by Iron Man, it possessed Cyclops, Emma Frost, Namor, Colossus, and Magik. These X-Men, now known as the Phoenix Five, returned to Earth to bring forth tomorrow.[1]

The Phoenix Five built a grand new Utopia, a floating fortress, for mutantkind. They began working to provide power, food and water for all the Earth. Not content with just that, they outlawed war altogether. The Avengers, however, mistrusted the Five. Wishing to prepare for the day when the Five would lose control and become destructive, they tried to retrieve Hope from Utopia. Cyclops and Emma alone defeated the Avengers, but they were saved by the timely intervention of the Scarlet Witch, who teleported the Avengers, and Hope, to safety.[2]

Scott realized they needed to hunt down the Avengers, imprisoning some of their members, while the rest were outlaws. After Namor tries to finish them against Cyclops' will, he's defeated by the combined forces of all the Avengers present in Wakanda, their hideout. After Namor fell, his portion of the Phoenix Force was bequeathed to the rest of the Phoenix Five. The Avengers escaped to an unknown location for the X-Men, and Charles Xavier telepathically alerts Scott to stop his actions or he will be stopped.[3]

As the number of Avengers were shrinking day after day, the Phoenix Four's lust for power and tyranny only grew. Professor Charles Xavier attempted to rescue the Avengers that were trapped in Magik's Limbo Prison, but the Rasputin siblings detected their presence before they could escape. The Avengers fought the Rasputin's to a standstill until Spider-Man caused a distraction. One that managed only to buy enough time to convince the siblings to fight each other for their share of the Phoenix Force. The ensuing fight caused both to fall down, and lose their portions of the Phoenix Force. Only later to discover that both Scott and Emma were powered from their teammates fall.[4]

Emma starts to cave into her dark side, killing a man who once committed a "hit-and-run" against a mutant and later acting more tyrannical to the point of threatening anyone who's not worshiping her. Scott confronts the Avengers in K'un-Lun searching for Hope only to be surprisingly beaten by her after she absorbed the powers of Scarlet Witch ,the Shou-Lao dragon and much of Cyclops' Phoenix power. With a single punch, Hope sent Scott to the moon, making him realize that in order to defeat her, he needs Emma's power.[5]

Cyclops cannot find himself to take the Phoenix from Emma, despite the fact that she taunts him. She tries to tempt him to burn the entire world and start again from nothing, but Cyclops refuses her. Their conversation is interrupted when they are attacked by the combined might of the Avengers and the X-Men. Professor X uses his telepathy to try and shut them down long enough for the Avengers and X-Men to take them down. Cyclops finally gives in and takes Emma's portion of the Phoenix, becoming the sole wielder of the Phoenix Force. After Xavier tries to shut him down again, Scott kills him and completely loses control of himself, becoming Dark Phoenix.[6]

Marvel: Avengers Alliance's version of the Phoenix Five featured Jean Grey as a member instead of Namor.

Retrieved from "https://marvel.fandom.com/wiki/Phoenix_Five_(Earth-616)?oldid=5634184"
Community content is available under CC-BY-SA unless otherwise noted.