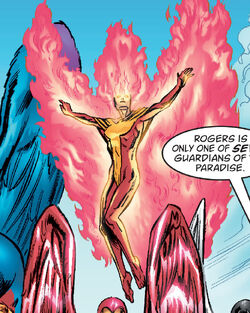 Gallery
Real Name
Phoenix Force
Current Alias
Phoenix
Aliases
Jean Grey
Relatives
Jean Grey (genetic template)
Affiliation
Avenging Host; Formerly Mar-Vell's army of the Dead; X-Men; Elders of the Universe
Base of Operations
Paradise
Status
Living Status
Alive
Identity
Secret
Citizenship
MaritalStatus = Single
Occupation
Guardian of Paradise; former Elder of the Universe, adventurer
Characteristics
Gender
Female
Origin
Origin
The Phoenix of Earth-9997 shares a similar origin to that of it's Earth-616 counterpart, however it has been revealed that the Phoenix of Earth-9997 is a member of the Elders of the Universe and existed in the universe that existed prior to the big bang.
Reality
Earth-9997
Creators and Appearances
Creators
Jim Krueger, Alex Ross, Dougie Braithwaite
First Appearance
Earth X #7
(August, 1999)

Though the origins and history of Phoenix of Earth-9997 match that of her Earth-616 counterpart, the following information has been revealed by both 3-D Man (Kyle Richmond) and the Watchman (X-51):

The Phoenix Force was originally a citizen of the first universe that existed prior to the Big Bang that created the current universe in which Earth-9997 resides. This original universe collapsed due to the manipulations and reproduction of the Celestial race. There were a number of survivors who were referred to as the "Elders of the Universe", the Phoenix Force being one of these elders.[citation needed]

It was later revealed that the Elders plotted to reunify the fragmented universe (and all it's parallel universe and alternate history counterparts) through the Realm of the Dead and with the aid of Death. The Phoenix Force was a part of this plot to reverse the damage the Celestials had already created.[citation needed]

It was foreseen that eventually Death would be destroyed and that an Elder of the Universe would have to live in the Realm of the Dead in order to facilitate the collection of souls, which was at least one important step in reunifying the broken universe. As the Elders were all nearly immortal and could not intentionally die, the Phoenix Force had to bond itself to a being that would be capable of sacrificing itself for others.[citation needed]

This being was Jean Grey of the X-Men, who during a mission in space was the lone pilot of a space shuttle traveling through a radiation storm while her comrades were in a shielded room. Unable to bond with the severely burned body of Jean Grey, it became a binary being with her, assuming her identity, personality and physical form and sealing her charred body in a cocoon to heal. When the shuttle crashed the cocoon remained at the bottom of Jamaica Bay, and the Phoenix Force took Jean's place.[citation needed]

The Phoenix ended up in Death's realm, still in the guise of Jean Grey, and was one of the few beings in this realm that were aware that they were indeed dead (citizens in the Realm of the Dead believe that they and those are around them are still alive, while others who are not present are deceased).[citation needed]

She eventually joined up with Mar-Vell's army to battle Death and her army. During this time, Scott Summers (now Mr. S, leader of the X-Men, who was assisting Mar-Vell in the land of the living) was able to establish a mental rapport with the Phoenix (although the real Jean Grey still lived on Earth-9997, Scott always referred to the Phoenix as "Jean") and she kept him informed as to the goings on in the Realm of the Dead and (later) Mar-Vell's Paradise. This soon became a great aid to Reed Richards and others who were trying to determine why the mortally wounded would no longer die following Death's destruction.[citation needed]

After the creation of Mar-Vell's Paradise, Phoenix became one of the Avenging Host, a group of former champions who were transmogrified by technology once belonging to the High Evolutionary. They were to act as guardian angels to those in Paradise and help those in the Realm of the Dead realize that they were indeed dead so that they could travel over to Paradise and live out their perfect afterlife.[citation needed]

During her time as one of the Avenging Host, its members began to doubt Mar-Vell's intentions, believing that he at he had no idea what occurred outside Paradise, that as it grew it threatened to consume the Negative Zone. Their doubts in Mar-Vell's quest were further strengthened when they began to realize that no new dead were appearing in Death's former realm. Phoenix would relay this information to Scott Summers, prompting the heroes of Earth-9997 to seek out Jude, the Entropic Man to become the new Death.[citation needed]

When Cap, 3-D Man, Comet Man, Benny Beckley and Thanos learned that each "Paradise" created for the realms citizens were simply wish fulfilment, the Avenging Host aided in freeing each citizen from their private "heaven" and resolved to confront Mar-Vell about his intentions. The Host (and Rick Jones) were all summoned and put on trial by Mar-Vell. Confronted by Mar-Vell with Captain America, Phoenix and the rest of the host were killed by their leader when Cap refused to take Mar-Vell's power.[citation needed]

Shortly after their death, the Kree army invaded Paradise and a large battle erupted. During the combat, Reed Richards arrived from the Negative Zone and confronted Mar-Vell himself. During their talk, Mar-Vell resurrected the Avenging Host to aid the citizens of Paradise defeat the Kree invaders.[citation needed]

After the battle's conclusion, Reed Richards was given the cosmic consciousness and Mar-Vell left Paradise. Phoenix's current whereabouts are unknown. It is presumable that she remains in Paradise guarding those who have chosen to remain in this realm.[citation needed]

The Phoenix Force in both her Phoenix flame form, and when she assumed the identity of Jean Grey are presumably the same of those of her Earth-616 counterpart.

In the Realm of the Dead, Phoenix retained the appearance and abilities similar to those of when she imitated Jean Grey. The reason for this is unknown, but may be due in part by the fact that most of the realms inhabitants' costumes, appearances, personalities, memories and so on are in part dictated by their alternate reality counterparts who are still alive, although there has been no conclusive evidence to suggest that this is the reason apart from the fact that it is the logic that explains why most citizens in the Realm of the Dead believe that they are still alive.

As a member of the Avenging Host, the Phoenix's body was transmogrified to resemble an amalgamation of her Phoenix form and that of Jean Grey. She had flaming wings capable of allowing her to fly. Although she never displayed any abilities or traveled beyond Paradise, it is presumable that she has the same abilities that Captain America and Daredevil have manifested, including the ability to change her physical appearance and travel to Death's Realm. She has also been able to travel out to the Negative Zone, however she is invisible to detection once outside the confines of Paradise.

The mental report she has shared with the X-Man known as Cyclops appears to have transcended even death, as Scott Summers and Phoenix have been able to communicate back and fourth telepathically during Phoenix's time in the Realm of the Dead and Paradise. This ability, however was not apparent until Summer was made aware of this, and perhaps has more to do with the human races mutation cycle, however any indication of this is only speculation at best.

Any other abilities or powers that are specific to her transmogrification into a member of the Avenging Host are as yet unrevealed.

Like this? Let us know!
Retrieved from "https://marvel.fandom.com/wiki/Phoenix_Force_(Earth-9997)?oldid=5476626"
Community content is available under CC-BY-SA unless otherwise noted.