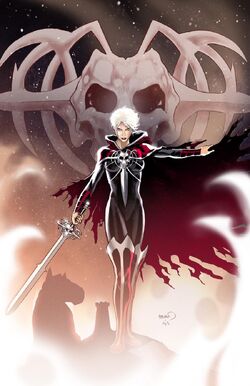 I am the chosen avatar of death. You want to learn about pain? I'll teach you! ... Now, who wants to go save the universe?

After Genis-Vell, then known as Captain Marvel, previously destroyed and recreated the universe, the "new" version was subtly altered with Phyla-Vell's existence being one of the changes. Phyla-Vell was the second artificially created offspring of Captain Mar-Vell who was created by her mother Elysius in the "new" universe because her first attempt (Genis-Vell) had been so successful.[6]

She fought her brother Genis-Vell, who was insane at the time, in the process helping to restore his sanity. She then tried to lay claim to the "Captain Marvel" title, though her brother refused to give it up.[6]

To save Rick Jones' girlfriend, Marlo Chandler, Genis had to travel to the future to see what would be the cause of her future demise. He asked Phyla to stay behind on Earth to keep watch over Marlo. In doing so, she encountered the being known as the Magus, who tried to kidnap Marlo. She and the telepath Moondragon foiled the plot, and Genis returned to Earth shortly after, telling her that he stopped a villainous plan to release the Magus hundreds of years in the future. Although, he suspiciously wouldn't tell her how he stopped it.[7]

During Annihilation, Phyla had been visiting her father's grave with Moondragon when the pair were attacked by Thanos who ripped off Moondragon's ear and gave it to Phyla, telling her to go to Drax the Destroyer and how his actions would determine Moondragon's fate, shortly before teleporting away with Moondragon. Drax indicated he would not stop his pursuit of Thanos.[9]

Phyla then went with Nova and Starlord to lead a final battle against Annihilus, being saved at the last second by a massive energy wave caused by the just freed Galactus, which left only the three heroes and Annihilus as survivors. Ultimately in the battle, Phyla managed to steal away the Quantum Bands that Annihilus took from Quasar, weakening him and allowing Nova to finally bring an end to the Annihilation Wave. She was then seen reunited with Moondragon, and deciding it was up to her to become the new Quasar.[10]

She was seen on the Kree fringe-world of Lamentis, helping with the rebuilding after the Annihilation Wave. Along with Moondragon, now her lover, they helped to defend a temple from raiders, wanting to teach that peace rather than violence was the way to go. They were attacked by a Kree Sentry when the Phalanx took over the War-Net. Phyla was the first to discover that the Kree Empire was cut off from the rest of the galaxy - as well as being told, by what she assumed were the Q-Bands, that she needed to "Find the Deliverer. Find the Redeemer".[4]

Accompanied by Moondragon, she followed the commands of a mysterious voice which instructed her to find the "savior" of the Kree empire. During her quest she battled the Super Adaptoid, learned how to control her new Quantum Bands, and discovered more about Moondragon's history, before watching her transform into an actual Dragon of the Moon to defend them. Quasar and the newly transformed Moondragon tracked the savior to the remote planet Morag IV, but were ambushed by the Super-Adaptoid. The heroes recovered thanks to the locals, but discovered the Adaptoid had already reached the savior and was attempting to assimilate them. After a brief fight, the Adaptoid unleashed a destructive force on the nearby town, forcing Quasar to choose the innocents over the savior at the cost of exhausting her Quantum Bands.[9]

Adam did not see the war with the Phalanx as his fight. But when the Phalanx come to capture him, he sped them far away, to a sanctuary used by the High Evolutionary. The Evolutionary explained to them that Supreme Intelligence hired him to remake the Kree species but they lost contact when the Annihilation War began. Phyla then figured that the person they were looking for was the Evolutionary himself, believing that he could create warriors similar to Adam to combat the Phalanx. Unfortunately, the sanctuary was attacked by the Phalanx's leader Ultron, who killed Moondragon. Frantic, Phyla hoped that the Evolutionary would heal her but unfortunately, Moondragon's form was an enigma that the Evolutionary could not solve. Angry at the death of her lover, Phyla attempted to kill Ultron, only to use up the remaining quantum energy in her bands. The High Evolutionary caused the sun where the sanctuary was stationed by to go supernova, while Adam helped them to escape. As they made their way to Hala to retrieve the Kree warrior army, Phyla lamented the loss of Moondragon. She became even more pessimistic when she broke her quantum sword against a Phalanx drone. Adam chastised her for being selfish and said that she'd be disgracing her father.[12]

When they arrived at the cloning base, they discovered that the Evolutionary had collaborated with the Phalanx. He subdued Adam so that Ultron could take over his body. Phyla was blasted away when she attempted to intervene.[13]

When Ultron faced trouble with the arrival of the Technarch also named Warlock and Nova, Phyla had a vision of Moondragon, communicating towards her from the edge of death itself, informing her that the barrier isolating the Kree galaxy has weakened and her bands are filling with energy once again. Though Phyla desired Moondragon to return, her lover urged her to help their friends. Joining the battle, Phyla returned Adam's soul to his body, once the Technarch Warlock forced Ultron out of it. Unfortunately, Ultron created a massive body out of 15,000 Kree Sentries that Ronan the Accuser was intending to use to annihilate Hala. Adam empowered Phyla with the souls of the Kree to give her the power to destroy Ultron.[14]

Phyla later joined Starlord's new Guardians of the Galaxy, a group dedicated to protecting the universe at all times.[15] The presence of hidden Skrulls was revealed on their Knowhere base, eventually the Skrulls were revealed to be pacifists escaping from the Skrull Empire's religious Dard'van Sect, Drax revealed to the rest of the team that he had overhead the truth of how the Guardians were formed; that Star-Lord had had Mantis tamper with their minds to ensure the formation of the team, which led the team to break up and go their separate ways.[10]

Phyla later accompanied Drax in his search for Cammi. Consulting with a soothsayer, they were then informed that they could save Moondragon. They went to Mentor, who apparently killed them. In Oblivion, they met Maelstrom and the Dragon of the Moon. Phyla made a deal with the latter to secure Heather's freedom. In exchange, she agreed to be the new avatar of Oblivion.[16]

Now calling herself Martyr, Phyla-Vell became a more abrasive and aggressive figure. When the Guardians attempted to negotiate with the Inhumans to stop the War of Kings, she ruined the attempt by taking Inhuman princess Crystal hostage instead; this led to a battle between the Inhumans and the Guardians, which she continued to escalate. Eventually, the Inhumans tried to end the war by detonating a weapon that would shatter space itself, creating a multiversal Fault.

When Adam Warlock stopped the Fault's growth by using a redundant timeline, one where he became the villainous Magus, Phyla-Vell revealed that her deal with Oblivion was to kill "the Avatar of Life" and she would know what to do when the time came. Knowing he would now become Magus, she ran Adam through but this failed to stop his transformation. Several of the Guardians, then stranded in the year 3009, were then sent back in time to stop Magus' creation and Phyla was prevented from making her move. This time when Warlock was transformed, she engaged him in combat - but Magus magically teleported her own sword from her hands and slew her with it.[17][18]

Actually a ploy by Magus, Phyla was revealed to be alive and in his custody on Sacrosanct where she helped release her other seemingly-deceased teammates, then ran off to confront Magus, leaving them behind. Coming to a cocoon she assumed to be Magus, the cocoon hatched before her, revealing a resurrected Thanos, who immediately slew her.[19]

Phyla-Vell possessed vast physical capabilities and was stated to have a "Continental" threat level by the Nova Corps (with investigations still in process).[21]

Kree/Eternal Hybrid Physiology: Like her brother Genis, Phyla-Vell's superior genetic inheritance potentially made her many leagues stronger than either Mar-Vell and Elysius; her mother and father. A genetically augmented Kree super-soldier and a godlike alien. Having the natural resistance to poison, toxins, and disease (systemic antidote), and a higher natural strength level; as well as the inherent ability to augment all of these assets via the absorption of ambient cosmic energy.[6]

As the successor to Mar-Vell's legacy after her elder brother Genis loused it up. Phyla-Vell had been tried and tested on a great many fields of combat and intellect expansion, having received intense training both on the throneworld of Kree-Lar and her own home planet of Titan.[22] On top of this she had inherited many traits from her war hero father and her cosmic deity mother.

FTL Flight: Due to her natural the natural Eternal and genetically-enhanced Kree heritage. Phyla-Vell possessed an inherent gift for flight. With the Nega Bands boosting her energized physiology, she could exceed the speed of light; able to traverse the universe without need of food, hydration or rest.[23]

Ambient-Energy Metabolics: Phyla had a natural affinity to harmonizing and absorbing the universal forces of reality around her. A trait she often utilized in conjunction with her Quantum and Nega Bands unique power sources. She was a natural energy sponge, able to absorb outside sources of energy directed at her be it directly or from the vary environment itself.

Cosmic Awareness
(Possibly formerly only.)
As Captain Marvel, Phyla possessed a fraction of her father's cosmic awareness. While not as prolific as that of his or her brother's cosmic awareness. It provided her with a predominant boosting of her instinctive combat skills and inductive reasoning. When she gained the Quantum Bands and they absorbed her Nega Bands, she supposedly lost these abilities as a result.[24]

Quantum/Negative Zone Force Manipulation:
(Possibly formerly only.)
Having spent so much time harnessing and utilizing energy from both the Nega Bands and the Quantum Bands. Phyla withheld the same capacity to channel and manipulate vast quantities of differing energies for her own purposes as her father and her brother, but supposedly just not on they're level. Phyla originally used her Nega-Bands as conduits for the energy she absorbed, re-channeling them through the bands and their properties. When she received the Quantum Bands, however, they absorbed and replaced the Nega-Bands. Supposedly if the Quantum Bands ceased functioning, Phyla was no longer capable of wielding energy without the Nega-Bands.[25]

Avatar of Oblivion: In order to rescue her lover, Moondragon from death itself. The cosmic entity known as Oblivion came to her while she battled the Dragon of the Moon. In exchange for becoming his avatar she was given new yet undisclosed powers that dwarfed her previous abilities in comparison.[16] What all these abilities were remains a mystery as she died shortly after receiving this upgrade when she ran afoul of a recently resurrected Thanos.[19]

At least the strength of a fit Kree.

When in possession of the Quantum Bands using up too much power in her quantum device will drain them. Also, the corruption left in the bands by Annihilus will bring out a dark side of Phyla that will cause her to declare all life is the enemy. As Captain Marvel or Martyr, no specific notable weaknesses.

Like this? Let us know!
Retrieved from "https://marvel.fandom.com/wiki/Phyla-Vell_(Earth-616)?oldid=6438729"
Community content is available under CC-BY-SA unless otherwise noted.