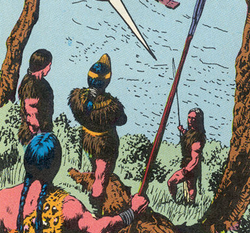 Taky and his men spotted the royal Atlantean barge passing the Pictish Isles on its way to Valusia, carrying Sareena to meet Kull. Some days after Sareena was murdered in the City of Wonders, on the central Pictish Isle, Taku was informed that Tu sought to salvage the alliance with the Picts by blaming the murder on an Atlantean. Presumably disgusted by the Valusian duplicity, Taku ordered that the invasion plans remain intact. The Pictish horde departed at dawn to attack Valusia.[7]

Like this? Let us know!
Retrieved from "https://marvel.fandom.com/wiki/Pictish_Isles?oldid=5717061"
Community content is available under CC-BY-SA unless otherwise noted.