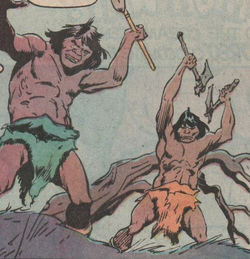 Formerly Caledonia and Pictland, British Isles; all of Europe

The Picts are the inhabitants of the Pictish Isles during the Pre-Cataclysmic Age (which ended circa 18,000 BC), of the Pictish Wilderness (or Pictland) during the Hyborian Age (until the Post-Hyborian Cataclysm circa 8,000 BC which caused the end of that Pictland), and of part of Europe (until they were driven off by the Gauls), then the British Isles (where they were driven off by the Celts, battled the Roman Empire circa 200 AD, then the neighboring Celt/British kingdoms circa the 6th century).

During the Pre-Cataclysmic Age, the Picts lived on the Pictish Isles,[12] a chain of island in the Western Ocean,[13] west of the Thuria and of Atlantis. Along with the Atlanteans and the Lemurians, they were the barbarians of their age.

The crumbling Thurian civilizations employed barbarian mercenaries (Picts, Atlanteans and Lemurians) as their armies, and consequently, their generals, their statesmen and often their kings were barbarians.[14]

When the Great Cataclysm occurred, the Pictish Isles were heaved up to form the mountain peaks of a new continent.[14] Its inhabitants perished, but a significant colony of them already established along the mountains of Valusia southern frontier were virtually unharmed.[1][15]

The Atlanteans and Picts of the mainland fought in the west part of the continent. The powerful Pictish nation outnumbered the Atlanteans, who were hurled back into a state of savagery while the evolution of the Picts stopped: 500 years after the Cataclysm, both kingdoms vanished. The Lesser Cataclysm achieve their ruin begun by their tribal wars. The Picts then existed as scattered clans of cave-dwelling savages with primitive speech, living in the southwest but having retained the name of Picts.[1]

1500 years after the Lesser Cataclysm, the Picts apparently defied the laws of nature, bu neither progressing or retrogressing, remaining savages.

Picts invaded the Valley of Zingg and merged with its nameless tribe of agricultural dwellers. The mixed race was then conquered by a tribe of Hybori who merged as well with them, and the result would become the kingdom of Zingara.

The Picts remaining in the Pictish Wilderness were confronted to their eastern neighbors, the inhabitants of the Bossonian Marches, peopled by descendants of an aboriginal race mixed with Hyborians.[4]

The ever more powerful Picts (as well as the Nordheimr and the Bossonians) would cause incessant bickering with their Cimmerian neighboors.

At about that time, the Nemedia priest of Mitra Arus decided to introduce the worship of Mitra to the Picts. Despite having benefited from Hyborian civilization contact, they had always fiercely resisted it. They still dwelt in clans generally at feud with each other. Arus nevertheless managed to remain safely among the Picts after meeting with the unusually intelligent chief named Gorm. In order to convince the Picts of Mitra's benefits, he spoke to Gorm about the wealth and fortune of the Hyborians, but Gorm foxed on the material riches rather than on the worship of Mitra.[16]

Wishing to see the civilized lands, Gorm requested from Arus to conduct them there, and soon, Picts came and went freely into all Aquilonia. Despite Arus' belief he was converting Picts to Mitra, the savages simply wished, and managed to learn how, to mine their iron deposits and work them into weapon. In doing so, Gorm began to assert dominance over the other Pictish clans.

Soon, increasing numbers of Picts entered service of Aquilonia's mercenary armies, and once their service completed, returned to the Pictish Wilderness with good ideas of civilized warfare. Gorm, then past middle age, became chief of chief, the closest approach to a king the Picts ad had in thousands of years. He moved against the frontier for war. Realizing his mistake, Arus tried to undo his work but was killed by a drunken Pict. Gorm nevertheless showed his gratitude to Arus by having the skull of his slayer set on top of the priest's cairn. Now clad in scale-mail and wielding steel weapons, the Picts burst upon the Bossonian frontiers, but were still held at bay for years by the Bossonians.

Due to an eastern war against Nemedia, the Bossonian marches were undermanned, but hearing of the Pictish invasion, whole regiments of Bossonians quit the Nemedian campaign and returned, defeating the Picts in a great battle (while directly causing the defeat of the Aquilonians against the Nemedians). In their wrath, the Aquilonians lured and massacred the Bossonian chiefs then ravaged the marches.

Free of the Bossonian resistance, and now an old man, Gorm led the Pictish invasion directly to the Aquilonian borders and swarmed the kingdom before its legions could return from the war in the east, causing (by synergy with other causes) the end of the Aquilonian Empire.[17]

Npw the masters of Aquilonia, the Picts slaughtered nearly all the inhabitants. It is presumably the Pictish thrusts that prevented the Hyrkanians from adding Stygia to their empire. 75 years after encountering Arus, Gorm was slain by Hialmar, a chief of the Nemedian Aesir.

For a short age, Hyrkanians and Picts battled each other over the ruins of the conquered world. As the Glacial Ages began, the Nordic tribes were driven southwards, pushing the Cimmerians as well. Hordes of Aesir and Vanir soon swarmed and reeled the Pictish Empire.

Another cataclysm created the British Island from the mountains of Western Cimmeria and the Mediterranean Sea. In the west, the remnants of the Picts possessed the lands.

In a later age, they would be overthrown by the westward drift of both Cimmerians and Nordics.[5]

Picts that ruled all Europe, before their primitive empire was destroyed by the Gauls.[18]

When two kings arose in the land of the Picts, the conqueror drove out the vanquished, and so many Picts made boats and set sail for the "far-off cliffs that gleamed white in the sunlight". There, they were confronted to a race of red-haired barbarians whom they drove off. They built huts of wattle, tilled the soil, cleared the forest, before the Celtic Gaels came from the Isles of the West. They drove the Picts into the forest and the mountains, though some Picts refused to leave the lands, hiding themselves into caverns, ravines and caves. Many Picts also mingled with the Celts. The Celtic Britons would later come from Gallia and conquer the Gaels.

A hundred years later, the Briton Cororuc would be captured by the "Little People" (as the Picts would be known to the Britons), a group of the last pure-blooded Picts. Their priest, an old Pict cursed in his youth by an old witch to live until the last child of the Pictish race shall have passed, intended to slay Cororuc as part of his revenge upon the Celts (despite the fact it was the Gaels and not the Britons who had conquered the Picts). Cororuc was saved by Berula, a Pict werewolf and chief among the Alban Picts, whom he had saved from a panther earlier, and was given guarantees of friendship by Berula and the old pict.[8]

During the 6th century, Picts (as well as Anglo-Saxons and Irish) were among the external enemies of Logres, Uther Pendragon's kingdom.[20]

The Picts have worshiped (or at least invoked the names) of many entities:

Like this? Let us know!
Retrieved from "https://marvel.fandom.com/wiki/Picts_(Earth-616)?oldid=5752261"
Community content is available under CC-BY-SA unless otherwise noted.