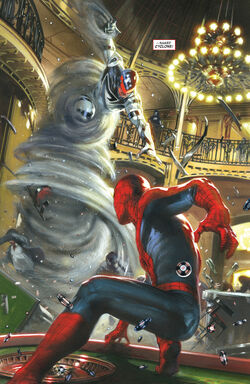 After the murder of the original Cyclone in the Bar with No Name massacre, the designs for his costume fell in the hands of a European-based family of the world-wide criminal organization, the Maggia. Maggia technicians managed to duplicate Cyclone's costume, and the Maggia leaders give it to their member Pierre Fresson.

Through unrevealed circumstances, Pierre Fresson was later seen among the Maggia leaders assembled by the Grim Reaper, who tried to claim leadership of the scattered, fractious families on behalf of Count Nefaria. Fresson was present as speaker for the European families, but when the Avengers invaded the meeting place, Fresson used his Cyclone-powers to escape. Fresson next appeared once more in the Crimson Cowl's employ. The Masters of Evil were confronted by Hawkeye and his allies Songbird and Blackheath who were searching for the legacy of criminal industrialist Justin Hammer. Their search ended with Hammer's daughter, Justine, who turned out to be the Crimson Cowl. Hawkeye convinced Fresson and other members of the Masters of Evil to side with him against Crimson Cowl and their former allies, pointing out the dangers of the super-weapon, a biological toxin that had been ingested by every single villain, including Cyclone, and would instantly kill them anywhere on the Earth. Hoping to throw off suspicion, Hawkeye made the villains reinvent their costumed identities, although Fresson refused to abandon his name and costume of Cyclone.[1]

The group ultimately defeated the Cowl and her Masters of Evil, and Blackheath managed to release an antidote into the atmosphere. The Thunderbolts immediately fought against the Elite Agents of SHIELD who caught up with them and wanted the remains of Blackheath's body, although he soon revived himself. The Thunderbolts were aided by the arrival of the true Citizen V, who needed the team's immediate help with his agency's ship-- the engines of which were made of alien technology that had began distorting, threatening to suck the Earth into the null space of a white hole. Fresson refused, as Hawkeye claimed that no one would have to help if they chose not to. Of course, this meant that they chose to remain in their villainous status quo, and Fresson was immediately remanded to SHIELD custody.[2]

Cyclone was recruited by the Owl to join Boomerang's small army as the Sinister Sixteen.[3]

Combat applications of the Cyclone costume.

Conventional vehicles and flight under his own power.

Cyclone has shown himself to be a racist as he referred to a black man, Cottonmouth, as a 'savage'.[4]

Like this? Let us know!
Retrieved from "https://marvel.fandom.com/wiki/Pierre_Fresson_(Earth-616)?oldid=5843775"
Community content is available under CC-BY-SA unless otherwise noted.