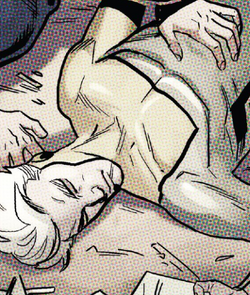 Quicksilver appeared in a flashback of Magneto's as he got drunk. Magneto remembered that Wanda had cast a spell to inflict harm upon her family members, but when it took place, the only person who was affected by it was Pietro, which knocked him unconscious.

Learning that Magneto wasn't their father, Wanda attacked Eric while he protected Pietro from from her powers. Magneto tried to pull himself to together after having the memory where he reverberated that Stryfe had killed them both.[1]

Like this? Let us know!
Retrieved from "https://marvel.fandom.com/wiki/Pietro_Maximoff_(Age_of_X-Man)_(Earth-616)?oldid=5142716"
Community content is available under CC-BY-SA unless otherwise noted.