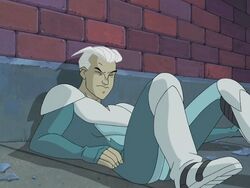 Quicksilver's father Magneto recruited him into the Brotherhood in order to keep an eye on Mystique, the team's leader. Although he remained a member of the Brotherhood even after Mystique openly turned against Magneto, Pietro remained loyal to his father and continued to receive direct instructions.

When Magneto revealed the existence of mutants to the world, Pietro finally showed his true colors by allying with his father. Pietro's vengeful sister Wanda, who hated their father for abandoning her as a child in a mental asylum, attempted to kill Magneto by crushing him underneath a Sentinel, although Pietro rescued him at the last second.

After this, Pietro disappeared (presumably joining the Acolytes), until Wanda managed to track him down in a diner (with some help from Caliban). Wanda sought to use Pietro as bait to draw out Magneto, and handed him over to the police. Magneto did not appear himself, but instead sent Gambit to take control of the remaining members of the Brotherhood (in Mystique's absence) and instruct them to rescue Pietro. They succeeded with some help from the X-Men Rogue and Shadowcat. Pietro was subsequently put in charge of the Brotherhood on Magneto's orders. He took advantage of the new authority by bossing around his former teammates. When Wanda was brainwashed by Mastermind into believing that Magneto had been a loving father (thereby removing most of her rage), Pietro willingly accepted her onto the team.

Pietro joined the other members of the Brotherhood (as well as several members of the X-Men) in facing off against Magneto, who had been transformed into one of the Horsemen of Apocalypse. When Apocalypse was defeated and Magneto freed, Pietro and Wanda helped their father away from the scene.

Superhuman Speed: Quicksilver can ran so fast that he can leave afterimages as he runs and can create sonic-booms and whirlwinds/tornadoes. He can also reach speeds that he can be invisible. He says that he made his costume in 1/4 of a second.

Quicksilver is a skilled tailor, making his costume.

He is impatient and arrogant, which often leads to his downfall.

Like this? Let us know!
Retrieved from "https://marvel.fandom.com/wiki/Pietro_Maximoff_(Earth-11052)?oldid=5397127"
Community content is available under CC-BY-SA unless otherwise noted.