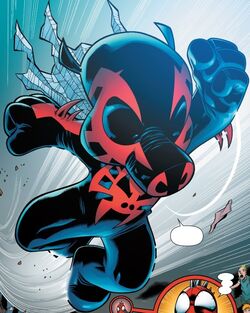 One night, at Al's chemical company Piguel O'Malley (who is a lot like Peter Porker, only he's a pig) is working a late janitor shift. While working, Perfesser warned Piguel to stay away from the vat of Spider-Venom in the room before leaving. But fate has a strange way of unraveling... like a spider spinning its web. Later Ducktor Doom 2099 broke into the facility and accidentally bumped Piguel into the vat. Piguel was able to swim out, claiming that the Spider-Venom tasted like Dr. Pepper but without the fizz. Piguel soon learned that he had spider powers much like that of Peter Porker (his ancestor). He returned home and put on his super hero costume that he kept in his closet for emergencies. He then set out to find Ducktor Doom 2099 as the all new hero... Spider-Ham 2099!

Seemingly those of Miguel O'Hara of Earth-928.

Super Hero costume, in case of an emergencies.[1]

Like this? Let us know!
Retrieved from "https://marvel.fandom.com/wiki/Piguel_O%27Malley_(Earth-93726)?oldid=5816593"
Community content is available under CC-BY-SA unless otherwise noted.