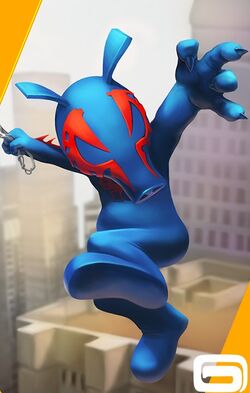 In 2099, scientist Piguel O'Malley accidentally gave himself the powers of a spider. He used his newfound powers to become the superhero Spider-Ham. He somehow found himself in the Heroic Age and joined the Spider-Ham Family.

While battling the Green Gobbler, the villain was pulled through a portal. Following him, the team found themselves on Earth; the portal being activated by the Green Goblin. Spider-Man quickly came in contact with them and recruited them into the Spider-Men to battle the multiversal Sinister Six, whom Gobbler had joined.[1]

Seemingly those of the Miguel O'Hara of Earth-928.

Like this? Let us know!
Retrieved from "https://marvel.fandom.com/wiki/Piguel_O%27Malley_(Earth-TRN461)?oldid=6058410"
Community content is available under CC-BY-SA unless otherwise noted.