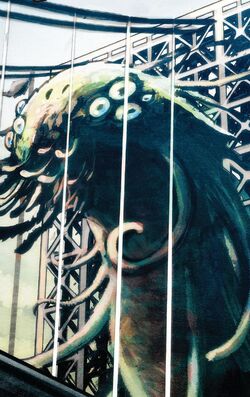 I am a criminal... the greatest Kosmos has ever seen ... Alone, I almost succeeded in smashing Kosmosian society, making slaves of them all! But I failed! Now I am safe here! Here I can do what I failed to do on Kosmos!

Pilai was a Kosmosian criminal, supposedly the greatest criminal in the history of his dimension. He had once tried to destroy the Kosmosian society and to enslave everyone else in Kosmos. Pilai nearly managed to do this while working alone, but he failed and was incarcerated in a prison dimension.[1]

When Dr. Vernon van Dyne opened a portal to this dimension, Pilai escaped to Earth. He teleported directly to Dr. van Dyne's lab, terrifying Vernon. He talked to Vernon about his identity and origins but then decided to take care of loose ends. He destroyed Vernon's gamma-radiation to ensure that nobody could track him down to Earth. Then he killed Vernon himself, to prevent him from informing anyone of his presence.[1]

Pilai was apparently destroyed by Ant-Man and van Dyne's daughter Janet, who realized he secreted formic acid and fired anti-formic acid which seemingly dissipated him.[1]

Pilai was actually teleported away by the Stranger to his laboratory with other creatures and escaped during the Overmind's assault.[2][3]

Like this? Let us know!
Retrieved from "https://marvel.fandom.com/wiki/Pilai_(Earth-616)?oldid=5774764"
Community content is available under CC-BY-SA unless otherwise noted.