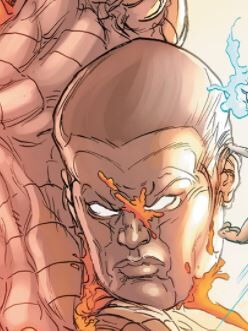 Brother of Magik, the pair were at some point sent to the Shield for an unknown crime and joined the Hel-Rangers. The pair disappeared on patrol in the Deadlands.[citation needed]

When the Shield was attacked by the combined efforts of the south led by none other than the twisted monstrosity of their fallen Commander Fury; Leah and Magik, who had planned since the beginning to hold a subdomain in the Deadlands to rule without submitting to God-Emperor Doom, showed up with Colossus and a demonic army to assist Abigail Brand and the Hel-Rangers against the Ultron Engine. Soon afterwards, Colossus, Leah and Magik deserted the Hel-Rangers and returned to their own domain.[1]

Seemingly those of the Piotr Rasputin of Earth-616 as well as those of a werewolf.[2]

Like this? Let us know!
Retrieved from "https://marvel.fandom.com/wiki/Piotr_Rasputin_(Earth-10192)?oldid=5676837"
Community content is available under CC-BY-SA unless otherwise noted.