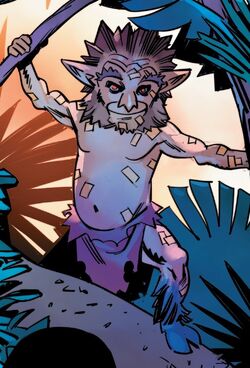 Major Problem Time, Pip me Lad. All the Watch's Top Brass have evaporated. Nature abhors a Power Vacuum! Fortunately this Situation's got a natural Cork prepared to fill the Gap. Past Year I've hung out with enough of these Super-Hero Types to figure out what it takes to be a Top Dog in their Kennel. Figured it'd only be a matter of time 'fore the Avengers or somebody enlisted me to lead 'em. Luckily, I've been preparin' for this Moment. World, get ready for a new and improved Pip the Troll! And now, on this Stage, for the first Time in the known Universe, Monster Island Revues is proud to present the amazing, utterly stupendous, fearless, cunning and totally dependable... Pip Man!

Pip was born on a planet named Laxidazia. He was born into royalty as the 260th in line for the throne. He had an interest in art and spent much of his time drawing portraits of the night sky.

On one such idea, he found a group of Laxidazian trolls, who were considered a subspecies and degenerates to be shunned by the others. After a long night of drinking with them, Pip awoke to find that he had gained the characteristics of a troll. Their liquor was in fact enchanted with some type of altering quality. Although he tried to hide it, his transformation, as well as his trollish behavior, caused him to be exiled.[3]

He spent time in various bars and seedy places. When the Magus' forces came to Laxidazia, they ordered the destruction of all trolls. Pip was captured and placed on a ship designated for those to be executed. There he met Adam Warlock and the two staged a rebellion to escape.[3] They became allies during Warlock's fight against the Magus.[4][5]. After the Magus was defeated, the two briefly parted ways.

Pip's mind was destroyed by Thanos, but Warlock placed him into his Soul Gem and along with Gamora he was eventually reformed in a new body. Pip was a loyal and valued member of the Infinity Watch.[citation needed]

Later, Pip searched for Warlock (who had been in hibernation) at the request of Thanos, who was searching for a way to deal with the Thanosi. Pip also helped Thanos and Galactus against the entity known as Hunger. As thanks, Thanos had him thrown out with the trash. Pip returned to working with Gamora and Adam Warlock.[citation needed]

Pip somehow came into debt with the goddess Hela, but escaped from her Inferno Club with a magical pendant which allowed him to morph into a human form. With the pendant, Pip went to New York City to party in bars and clubs. Meanwhile, Hela, under the guise of Halja, hired X-Factor Investigations to find Pip. Madrox and Banshee found Pip at a local pub and inadvertently alert Hela to his location. Realizing that they just hand Pip over to the goddess of death, Madrox and the other felt extremely guilty and headed to Las Vegas to save him.[6]

With help from Thor, X-Factor battled Hela's undead army from Niffleheim and rescued Pip.[7] Since his rescue, Pip insisted on repaying X-Factor by working as their secretary.[8] However, it also appeared Pip was serving Agamemnon with plans for Wolfsbane's baby, Tier.[8][9][10]

During his pursuit to quit smoking by moving away from any galaxy with cigarettes, Pip crossed paths and joined the Ravagers, a band of mercenaries led by Yondu Udonta. The Ravagers became tangled with a group of refugees from a species that possessed the natural ability to materialize their prayers into diamonds, helping them move from planet to planet to evade Chargazel's Raiders, and they eventually settled on Ego the Living Planet. The Asgardians of the Galaxy stumbled into the Ravagers shortly before the Raiders caught up with them.[11] Both teams worked together to repel the Raiders, and parted ways; the Ravagers remained on Ego while the Asgardians continued their way.[12]

Originally Pip had no superpowers, but through various magical interventions (such as Adam Warlock's magic and possessing the Space Gem), he has gained the powers:

With the Thor's Hammer Pendant:

Hacking: Pip admitted to being capable of hacking into the Avenger's files to look into She-Hulk's file.[14]

Pip originally possessed a level of strength equivalent to that of a male troll of the same height, physical age, and build who engaged in moderate regular exercise. After his resurrection, Pip's new body had gained superhumanoid strength. It is estimated that he can lift around 10 Tons.[15]

Like this? Let us know!
Retrieved from "https://marvel.fandom.com/wiki/Pip_Gofern_(Earth-616)?oldid=6452945"
Community content is available under CC-BY-SA unless otherwise noted.