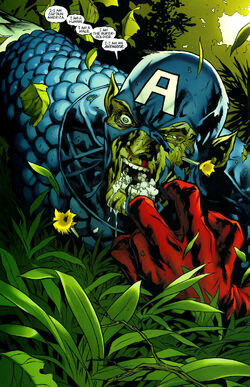 I-I am Captain America. I am a human. I am a male. I am the super-soldier. I-I am an Avenger.

Pitt'o Nili was a devoted Skrull and follower of Veranke. His family died on Phalax Six, leaving him nothing to live for besides duty. On Satriani, he agreed to undergo a procedure that would, in mind and body, make him into an exact duplicate of Captain America, if Captain America had been captured and held captive by Skrulls years earlier. Later, alongside other specially developed Skrulls, they escaped to Earth, crash-landing in the Savage Land, and fought the current heroes, believing them to the impostors. Pitt'o was revealed after tracking the real Spider-Man down and being confronted by him alongside Ka-Zar, Shanna and several tribesmen who then used poisoned blow darts to disable him and regress him back into a Skrull. Shanna killed Pitt'o Nili when the only answer he would give to their questions was 'I am a human'.[1]

Like this? Let us know!
Retrieved from "https://marvel.fandom.com/wiki/Pitt%27o_Nili_(Earth-616)?oldid=5744044"
Community content is available under CC-BY-SA unless otherwise noted.