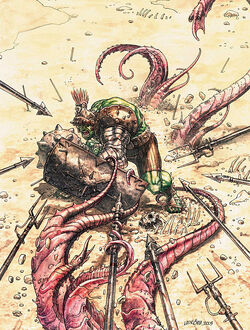 While living as a hermit in Alaska, Bruce Banner is contacted by Nick Fury to help S.H.I.E.L.D. in destroying a rogue space weapon called the Godseye which could detonate all the nuclear bombs in the world. The Hulk is convinced that he is the only being who can save the Earth from a rogue satellite. S.H.I.E.L.D., with the cooperation of other heroes, then launch Hulk into space to confront the problem, only to leave him stranded, hurtling towards a world uninhabited by sentient life (where he will have no one to hurt). Due to a navigation systems malfunction and a spatial wormhole, the Hulk finds himself on a strange new world of Sakaar controlled by the Angmo-Asan (Earth-616). Hulk is surprised when the King's guards can hurt him (as the wormhole weakens all who pass through). The Hulk is then drafted as a gladiator for the King's amusement. The Hulk unites with other gladiators to form the group known as the Warbound, united until death. They then lead a series of battles against the Red King and his imperials, eventually overthrowing him. The Hulk then becomes the king of Sakaar and marries the Red King's ex-bodyguard, and rules the planet until the spaceship he arrived in explodes, killing thousands, after just three days of the Hulk's rule. The Hulk reunites with the Warbound and they leave the shattered planet of Sakaar for Earth.

§ Quotation = Time and time again, your anger and power have threatened the entire planet. So when we learned that Fury sent you into space, we had to seize the opportunity. I have always thought of us as friends, Bruce, so I am truly, genuinely sorry. But for your sake and ours, we're sending you away. It's the only way we can be sure. § Speaker = Reed Richards (Earth-616)§Reed Richards

§ StoryTitle1 = Exile, Part 1 § Synopsis1 = The Hulk has been blasted off into space by the Illuminati, a clandestine group consisting of Mr. Fantastic, Doctor Strange, Iron Man, and Black Bolt. They apologize to the Hulk, but insist that this was necessary to save Earth from its inevitable destruction at the hands of the Hulk. The Illuminati promised a perfect destination, a lush planet full of wildlife but no intelligent life forms. Furious at this betrayal, the Hulk lashes out of the ship, sending it off course. It ends up traveling through a great portal and he emerges on a vicious planet inhabited by an alien race and governed by the Red King. Weakened by the portal, the Hulk is easily defeated by slavers who tag him with an obedience disc that saps his will.

When he awakes from his travels to an unknown destination, Hulk finds himself in a gladiatorial arena accompanied by a number of feeble-looking bugs with swords and armor. One of the insects is a creature called Miek the Unhived. Seeing the Hulk's great strength, Miek instantly admires the gamma-spawned monster. The crowds cheer and the Red King looks on as a vicious creature known as the Great Devil Corker emerges from the ground. It swallows Hulk much to the crowd’s annoyance, but seconds later the creature bursts open and among its remains stands our green friend. More of the creatures come but Hulk takes care of them in no time at all, whilst receiving loud cheers from the crowd. Ultimately, the battle is won thanks to the Hulk and Miek tells him that they will potentially be pardoned. However, the Hulk wants nothing but revenge and tries to attack the Red King. His bodyguard, Ciera the Oldstrong blasts the Hulk back and Angmo goes into the arena in a powerful exoskeleton to battle the Hulk one-on-one. Both combatants manage to cut each others face. However, when the Hulk is about to win the battle, Ciera steps in again and incapacitates the Hulk. Dubbed the Green Scar, the Hulk is carried away. The Red King decides that the Hulk and the other gladiators will be taken to the Maw.

Retrieved from "https://marvel.fandom.com/wiki/Planet_Hulk?oldid=5462457"
Community content is available under CC-BY-SA unless otherwise noted.