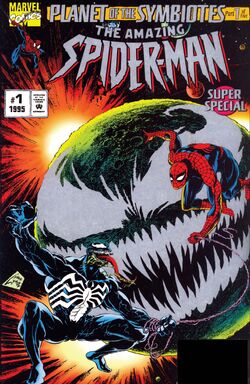 Neo-Luddite terrorists armed with laser rifles were trying to destroy the Clystron Wave Modulator. Which was a machine that compacted energy waves, thereby multiplying the source by ten. Spider-Man arrived to stop them and was joined by Venom, forcing their retreat. Spider-Man went to the Fantastic Four to use their computers to find out more about who the terrorists were after, and asked the Thing if he wanted to help which he agreed. They went to the Stanley Auditorium where Dr. Anton Sperzel was demonstrating to other scientists virtual reality and using it to control a drone.[1]

The Neo-Luddite terrorists arrived to assassinate the doctor but Spider-Man and Thing arrived soon after, to stop the terrorists who were using the drone. Venom arrived just in time to save the doctor's life. During the fighting, Eddie Brock realized that it was the symbiote that was influencing him to kill and Spider-Man convinced him to reject the symbiote. Brock rejection of the Venom symbiote made it leave and out of sorrow at being alone it screeched a powerful psychic scream. Which drew the attention of a symbiote ship to Earth.[1]

The symbiotes began to possess and murder humans. Believing that the culprit was the Venom symbiote, Eddie Brock, Spider-Man, and the Scarlet Spider headed north together to investigate. They tracked the symbiotes to the forests of upstate New York, where they found a dozen symbiotes the Cystron Modulator to a structure they've built. They were then ambushed by other symbiotes who had been camouflaged.[2] During their battle with the symbiotes, the three web slingers were pulled into the stargate.[2][3]

The three found themselves in another world which had been conquered by the symbiotes. Where they were forced to battle the symbiotes until they found a location to hide. Brock once again bonded with the Venom symbiote, which had temporarily bonded with the Scarlet Spider, so he could communicate with the symbiote. Which told them of the history of the symbiotes, who were addicted to strong emotions, conquered worlds to enslave hosts, and drained their hosts of all life. Of how the Venom symbiote was thought of as an aberration as it did not want to dominate it's host but bond with them.[3]

They learned that entire races were used up by the symbiotes therefore symbiote scout ships were always scouring the galaxy to find races that could become suitable replacements. A scout ship heard the psychic scream and tracked it down to Earth. Where they used local tech and built a stargate. They went back to the stargate and found it deserted, only to discover that the symbiotes had been camouflaged. Forcing them to fight their way back home, but were followed by an army of symbiotes.[3]

Symbiotes spread across the world, enslaving human hosts. Bringing death and despair across the planet. Military forces and super heroes engaged the symbiote invaders. Some of the super heroes like the Black Bolt and Human Storm achieved victories over the symbiotes via the use of sonics and fire, while other heroes like Captain America were enslaved by the symbiotes. The symbiotes were mostly targeting strategic locations (preferring defendable bases to take over) and civilians were being advised to stay indoors and lock the doors.[4]

Spider-Man, Venom, and the Scarlet Spider ended up in a shopping mall, where they collected sonic and fire devices to use as weapons against the symbiotes, only to discover that the symbiotes were already, though they managed to defeat the symbiotes. Some humans willingly merged with the symbiotes, in exchange for rewards, which resulted in Carnage escaping his prison. The three returned to the Stargate to find it defended by symbiotes backed up by energy beam cannons and alien ships. They were going to shut down the stargate but the symbiotes destroyed it themselves, as it had already been shut down on the other side since the invasion force had all come through it. Carnage arrived by then, having consumed symbiotes along the way which increased his size to 40 ft in height.[4]

They fought Carnage and the symbiotes, and escaped. Spider-Man, Venom, and the Scarlet Spider returned to NY City, and came up with a plan to put the symbiotes into a coma with a psychic scream from Venom. New York City itself was on fire with no police on the streets or no phone service, and for days screams could be heard. Carnage arrived at that moment, having grown to be over 100 ft tall. He stopped "snacking" on symbiotes once he figured out they were causing chaos which he liked. Spider-Man and the Scarlet Spider fought Carnage to give Venom time to subdue the symbiotes with his psychic scream. They lured Carnage to an oil rig from which fumes were coming out, that lit once they reached the wildfires, putting him out of commission. The two were then swept away by a "sea" of symbiotes that flooded the streets of NY City. Eddie Brock completely bonds with the symbiote, after which he is able to create a psychic scream powerful enough to cause the symbiotes so much pain and despair, that they committed suicide and turned into dust. Carnage was later taken back into custody.[5] 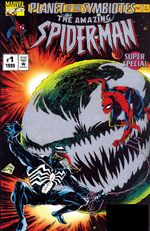 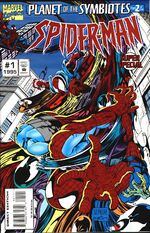 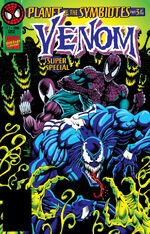 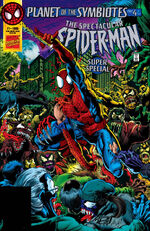 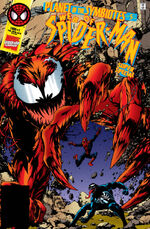 Retrieved from "https://marvel.fandom.com/wiki/Planet_of_the_Symbiotes_(Event)?oldid=6030951"
Community content is available under CC-BY-SA unless otherwise noted.