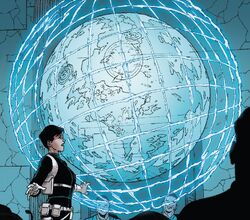 The Planetary Defense Shield was originally conceived by the Red Ghost after discovering that harvesting a Chitauri queen egg on Earth would lure countless Chitauri to invade the planet.[3] He devised the force field, codenamed Project Onicef,[1] as a way to protect the globe from such an invasion.[3]

As part of his plan to take over America, the Hydra-loyalist Captain America who had secretly supplanted the real Steve Rogers raided Red Ghost's base of operations and killed him. Having learned of Project Onicef,[1] Steve made sure it reached the hands of S.H.I.E.L.D. diector Maria Hill.[3]

When Hill found herself indicted for trial and facing potential discharge from her position, she asked a group of S.H.I.E.L.D. scientists to review all of the organization's red file proposals until they discovered something that, if presented by her, could absolve her from trial and potential punishment. The scientists discovered Red Ghost's designs, and Hill found interest in the idea of a planetary force field, particularly in light of the recent superhuman civil war, which started due to Thanos' arrival on Earth, and a looming Chitauri invasion.

During her trial, Hill presented the idea of the Planetary Defense Shield, hoping it could turn the tribunal in her favor, claiming it could represent bad publicity for S.H.I.E.L.D. if she let out that they passed the opportunity to create such a defense measure against invaders as a consequence of her deposition.[2] When the tribunal refused to play along with Hill, she fled from the Helicarrier with the plans for the Shield, and gave them to Captain Marvel of the Alpha Flight space initiative.[4]

Captain Marvel later personally endorsed the creation of the Shield to the President of the United States, requesting complete autonomy in its implementation,[5] but delayed application when an alien refugee situation presented itself on Earth, out of fear that the Shield would cause innocent aliens to become trapped outside.[6] In spite of the potential postponed activation, construction of the Shield's generator began after Senate Majority Leader Townes helped garner support in Congress, and with the help of Governor Hartnett, Alpha Flight secured a site in Michigan.[7]

When the Chitauri were preparing to invade Earth, a Hydra suicide bomber blew himself up and damaged the Planetary Defense Shield.[8] Ironheart and an A.I. of Iron Man were tasked with fixing the Shield before the Chitauri attacked Earth. Suddenly, the Shield activated on its own, much to Ironheart's and the A.I.'s surprise. They realized that the suicide bombing was only a distraction to make it look like the Shield was damaged so some outside source could activate it to stop the Chitauri invasion and trap the heroes up in Earth Orbit that were holding off the invasion.[3] What Ironheart and Iron Man did not know was that Steve Rogers was a secret Hydra sleeper agent and had tricked Rick Jones into giving him the codes needed to control the Shield so he could set up his trap.[8] The Chitauri invasion had also been orchestrated by Captain America, who had found the Red Ghost's plans and secured a Chitauri queen egg.[9] The establishment of the Shield was only a part of Captain America's plan to neutralize potential adversaries during Hydra's subsequent take over of the United States.[3]

As Captain America seized control of the government, waves of countless of Chitauri regularly attempted to reach the Earth.[10] Months into Hydra's reign, a army of rebels named the Underground managed to recover one fragment of a Cosmic Cube.[11] After managing to establish contact with Alpha Flight and the heroes trapped on the other site, they coordinated an attempt to take down the Shield. Even though Alpha Flight turned its space station into a bomb and crashed it into the Shield, the force field held the impact. Sam Wilson's use of the Cube shard allowed for Quasar to wake up from a coma after she had succumbed to injuries while fighting the Chitauri Wave in the early invasion attempts of the alien race. Quasar proceeded to blast the Shield with all of her power until it eventually gave in and was destroyed,[12] though the act cost her her life.[13] Captain Marvel subsequently flew to the location of the Chiaturi eggs, which had been previously pin-pointed while the Shield was still up, and destroyed them, ensuring the Chitauri would cease their rampage.[12]

In theory, the Planetary Defense Shield is a truly impenetrable force field surrounding the Earth, and more powerful than those created by beings like Sue Storm, Magneto, or Graviton by an order of thousands, making it the strongest protective shielding ever invented. It also permeates everything below itself with gray matter particles that intercept any portal openings used by teleporters.

The shield would also act as a conductor capable of channeling energy applied into it, redistributing the excess back into space and re-purposing the remaining.[2]

The Planetary Defense Shield is beamed through a main installation in Michigan,[7] with a network of automated signal-boost outpost stationed worldwide at regular intervals. One of these such outposts was located in Uzbekistan.[15]

Like this? Let us know!
Retrieved from "https://marvel.fandom.com/wiki/Planetary_Defense_Shield?oldid=6433235"
Community content is available under CC-BY-SA unless otherwise noted.