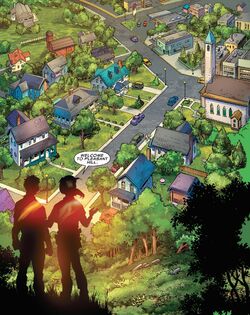 It's the American Dream. Tidy homes... friendly neighbors... a vibrant main street, and best of all-- no crime. Pleasant Hill is the perfect small town, the best place on Earth. Trust me-- We're like a @#$% Rockwell painting over here.

Pleasant Hill was a supervillain prison unlike any other. Using the reality-warping abilities of a sentient Cosmic Cube known as Kobik, S.H.I.E.L.D. turned Pleasant Hill's prisoners into mild-mannered versions of themselves, changing their appearance, and also altering their memories to match their new lives as productive members of society.

The town was under constant surveillance by S.H.I.E.L.D. agents,[1] with ninety-six operatives on the ground, and forty civilian support staffers signed under N.D.A.s, most of them who acted as members of the community to help accommodate new prisoners. The outskirts of Pleasant Hill were surrounded by a StarkTech force field that became visible with touch.[1]

After regaining their true forms, Baron Helmut Zemo and Fixer started restoring all the inmates to normal as part a plot to get revenge on the S.H.I.E.L.D. personnel at Pleasant Hill.[2]

Zemo and his army of villains unleashed a coordinated assault, taking over the town hall and turning it into a lock-up to hold numerous staff members and citizens hostage. As a consequence of the chaos the town spiraled into, Kobik fled from her caretakers.[3]

Both the main team and the Unity Division of the Avengers arrived on the scene to restore peace, but they were sidetracked by Kobik before they could join forces and take the fight to Zemo.[4]

After baiting Kobik by posing as allies, Kraven the Hunter and the villains with him captured her with a containment device created by the Fixer, with the objective of turn her into a proper Cosmic Cube and use it to overwrite reality. The heroes confronted Zemo at the town hall, but not before using the super-speed, phasing, and teleportation powers of some of their members to keep the hostages out of harm's way. Zemo's army of villains held the line to buy the Fixer's device enough time to cubify Kobik. With the intervention of the recently-empowered new Quasar, Agent Avril Kincaid, Kobik was freed from the device. Disgruntled by the situation and disillusioned with what she had experienced of humanity so far, she teleported Baron Zemo and Erik Selvig away from Pleasant Hill before disappearing herself. With their leader gone, the villains tried to escape from the town. S.H.I.E.L.D. agent Mach VII had managed to send a distress signal, so when the bad guys ran for the hills, they found an aerial barricade waiting for them. With the airborne support blocking the villains, the Avengers proceeded to finish them off.[5]

In retaliation for what happened at Pleasant Hill, the Army of Evil attacked Manhattan during Hydra's rise to power.[6]

The status of Pleasant Hill after the conflict was contained is unknown.

Like this? Let us know!
Retrieved from "https://marvel.fandom.com/wiki/Pleasant_Hill?oldid=6473844"
Community content is available under CC-BY-SA unless otherwise noted.