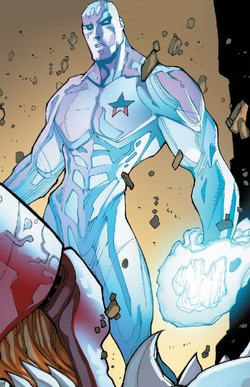 In the 31st century of Earth-691, the twin worlds of Pluto-Charon were home to a race that was developed by techno-barons' genetic engineering to breed a sub-species of humans to colonize Pluto.[1]

Martinex T'Naga, last known survivor of Pluto, escaped his world through the inter-colony teleporters along with Charlie-27, the last known Jovian.[1]

Resistant to heat and cold, thermokinesis

Like this? Let us know!
Retrieved from "https://marvel.fandom.com/wiki/Pluvians?oldid=6451096"
Community content is available under CC-BY-SA unless otherwise noted.