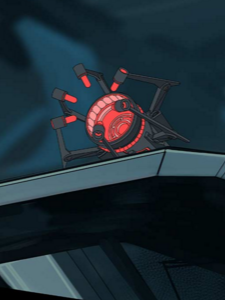 An alien of unknown origin named Corhanis was traveling throughout the universe for eons until her eventual capture by The Collector.

The Collector wished to know everywhere that Corhanis had been and everything that she had seen, in order to use this knowledge to expand his collection, but Corhanis had no concepts of maps nor star charts, and thus could not adequately explain where specifically she had ventured.

The Collector did not believe her, and thus imprisoned her within a Pocket Dimension Storage Vial. He programmed the Vial to prevent her from leaving, but once inside to do whatever she liked.

With so much time to herself, Corhanis learned to perfect shape-shifting abilities more advanced than was commonly capable by a member of her species. Eventually she realized that she could also alter her surroundings, so she crafted many things including a castle in which to live, but eventually came to realize there was nothing left to master, and that the Vial was as much of a prison as her former cell in the Collector's Museum.[1]

At some point Rocket Raccoon stole the Pocket Dimension Storage Vial containing Corhanis from The Collector. He used the device to store various weapons and other items until one night on Knowhere when Drax the Destroyer, Gamora, and Star-Lord were awakened aboard the Milano by the screams of Groot.

The trio went to investigate and discovered the Flora colossi attempting to extract Rocket Raccoon from having been sucked into the Pocket Dimension Storage Vial. Despite a subsequent struggle, all five of them were eventually pulled therein.[2]

The Guardians of the Galaxy found themselves in free fall for over ten minutes during which time Peter blamed Rocket for the present situation, but he in turn insisted that something had grabbed him and pulled him in. Eventually they landed upon an island strewn with items that Rocket had placed within the storage device, but was never able to retrieve. There was however one item that he was not responsible for placing there: Corhanis' Impossible Castle.

Once inside the castle, the Guardians entered into a game of cat and mouse, as they tried to capture Corhanis, who in turn worked to isolate the team members from one another. Ultimately Corhanis called Drax a coward and enraged by her comments he pursued her into a room which she then sealed off from the rest of the Guardians.[3]

Now alone, Corhanis challenged Drax to single combat, the terms of which being, if she won, then he would have to help her escape. He agreed and Corhanis then shape-shifted into a seemingly non-threatening chubby caterpillar-like creature. Drax mocked the chosen form, only to be caught off-guard by the rapid strike of tentacles which wrapped around his limbs and neck, pulling Drax into Corhanis' gaping maw.

Having been swallowed whole, Drax now found himself in a blinding void standing before Corhanis. After he conceded defeat, the shapeshifter explained how she had come to be imprisoned within the Pocket Dimension Storage Vial, and that she believed by assuming his form, she could then bypass The Collector's force field to escape her prison. She then rejoined the Guardians of the Galaxy in the guise of Drax, explaining that she knew the way out.[1]

Retrieved from "https://marvel.fandom.com/wiki/Pocket_Dimension_Storage_Vial?oldid=5615225"
Community content is available under CC-BY-SA unless otherwise noted.