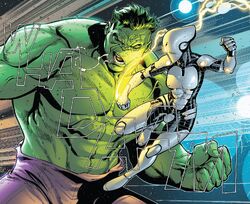 The Pod Undersuit was a user interface within the Pod System.[1] After Pod's death,[2] it was worn by Aikku Jokinen during her time as Enigma,[3] until it was eventually destroyed by the Hulk as she attempted to prevent him from entering the Avengers Auxiliary Headquarters.[4]

Like this? Let us know!
Retrieved from "https://marvel.fandom.com/wiki/Pod_Undersuit?oldid=6437607"
Community content is available under CC-BY-SA unless otherwise noted.