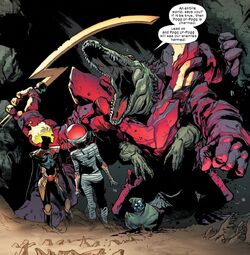 Pogg Ur-Pogg is a beast original to Amenth. He is recruited as a Swordbearer of Arakko by War and Pestilence in exchange for gemstones and the promise of plunder from Earth.[1]

Pogg Ur-Pogg took part of the tournament and its challenge by facing off his opponent, Magik. Instead of a fight as expected, they had an arm brawl, in which he won earning a point for his team.[2]

Facing off against Magik again without the use of their swords, this time they were to use hand-to-hand combat. Quickly trying to end the battle, Pogg swallowed her, but didn't realize she knew his weakness, that Pogg Ur-Pogg actually lives inside an organic crocodile-like suit. Once she was swallowed, she dragged him outside of the suit and punched him, earning a point for the Krakoa team.[3]

Pogg Ur-Pogg rhymes everything he says, no matter what the situation.

Like this? Let us know!
Retrieved from "https://marvel.fandom.com/wiki/Pogg_Ur-Pogg_(Earth-616)?oldid=5886533"
Community content is available under CC-BY-SA unless otherwise noted.